Welcome to the NYU Journal of Law & Liberty!

Registration is now open for the Eighth Annual Friedrich A. von Hayek Lecture in Law.  This year's lecture, "Freedom, Innovation, and Intellectual Property," will be delivered by Professor Robert D. Cooter, the Herman F. Selvin Professor of Law and Faculty Co-Director of the Law and Economics Program at Berkeley Law.
Volume six, number two of The Journal of Law & Liberty brings to publication a series of articles inspired by last spring's symposium, entitled Plain Meaning in Context: Can Law Survive its Own Language? The articles contained in this issue include the following:

Toward a Theory of Legal Interpretation by Scott Soames of the University of Southern California.

The Rule of Text: Is it Possible to Govern Using (Only) Statutes? by Peter Tiersma of Loyola Law School, Los Angeles.

The Anti-Parroting Canon by Hanah Metchis Volokh of Emory University School of Law.

A Penguin's Defense of the Doctrine of Equivalents: Applying Cognitive Linguistics to Patent Law by Kristen Osenga of the University of Richmond School of Law.

And finally, our very own Richard Epstein's eponymous article entitled Plain Meaning in Context: Can Law Survive Its Own Language?

The staff of the Journal of Law and Liberty are now blogging about the latest legal news and policy developments within the sphere of classical liberalism.

The Journal of Law & Liberty is the first student-edited law journal dedicated to the critical exploration of classical liberal ideas.  We are dedicated to providing a forum for the debate of issues related to human freedom from both theoretical and practical standpoints.  Our focus includes the nature of rules and order, theories of rights and liberty, legal history, jurisprudence, constitutional law, historical and contemporary legislation, and more.  We seek scholarship from philosophers, jurisprudes, economists, and historians, as well as from lawyers.  As a result, our staff editors are confronted with a wide range of issues and an even wider range of approaches.  This breadth, coupled with the diversity of viewpoints among members of the journal, fosters a spirit of debate among journal members that we actively encourage.

Additionally, each year we present the Friedrich A. von Hayek Lecture.  Last year's lecture, entitled "The Hayekian Judge," was delivered by Judge Robert Smith of the New York State Court of Appeals. 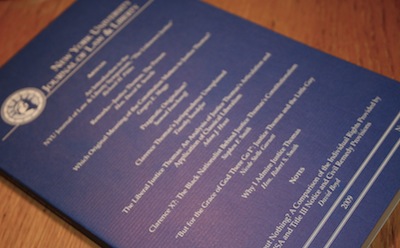 Toward a Theory of Legal Interpretation, by Scott Soames

The Rule of Text: Is It Possible to Govern (Only) Using Statutes?, by Peter Tiersma

The Anti-Parroting Cannon, by Hanah Volokh

A Penguin's Defense to the Doctrine of Equivalents: Applying Cognitive Linguistics to Patent Law, by Kristen Osenga

Plain Meaning in Context: Can Law Survive Its Own Language?, by Richard Epstein