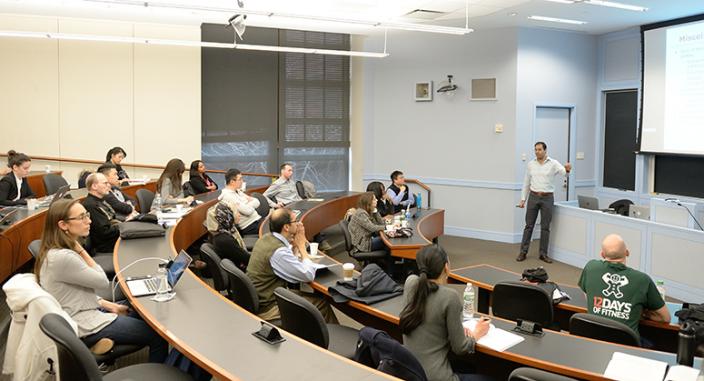 The semester had ended, but one classroom at the Massachusetts Institute of Technology was packed with dozens of MIT postdoctoral researchers and engineering graduate students, Harvard University physicians and biologists, and Boston-area entrepreneurs. They came to learn about patent law in a four-hour workshop taught by four NYU Law students.

The workshop, “Patent Law Essentials: What Scientists, Engineers, Physicians & Entrepreneurs Need to Know,” is an entirely student-run endeavor. It was created by Stephen Hou ’17, an MIT alumnus who left the technical field to pursue law, and since its launch in 2016, more than 300 people have taken the workshop around the world. It has been presented at MIT, NYU Law, the Chinese University of Hong Kong, and the University of Pennsylvania, as well as via livestream at NYU Abu Dhabi, Harvard, Stanford University, and the Scripps Research Institute.

Covering the basics of US patent law, the workshop identifies key issues that inventors should know, highlights recent patent law developments, and draws examples ranging from computer software to the pharmaceutical industries. “Nothing like this exists at other universities,” Hou says. “It’s either very cursory material or a full law school course on patents. We explain the nitty gritty of patent law, how it applies to inventors, and best practice tips.”

Hou is positioned to bridge the gap between the workshop’s attendees, many of whom have minimal or no legal expertise, and the labyrinthine intricacies of patent law because, in addition to his engineering background, he has also worked in that field. Hou served as a technical specialist at Finnegan, Henderson, Farabow, Garrett & Dunner, a boutique patent law firm, before entering law school, and spent two summers at the patent prosecution and client counseling group of Morrison & Foerster.

As a 2L, Hou conceived the idea for the workshop when he realized his knowledge of patent prosecution would be valuable to researchers in many scientific and technical fields. He then recruited three fellow NYU Law students who were also electrical engineers steeped in patent law. Julian Pymento ’17, who holds bachelor's and master's degrees from NYU Tandon School of Engineering, co-chaired the patent committee for the NYU Law Intellectual Property & Entertainment Law Society. Chih-Yun (Steve) Wu ’17 worked for three years in patent prosecution for startup and corporate clients. And Ryan Hyunjong Jin ’18 not only previously worked as an engineer at Samsung, but was also a finalist in the company’s Creative Lab competition—and is the inventor of a digital micromirror device and image sensor technology that have been granted patents.

The course has attracted not only postdoctoral researchers in engineering and medicine who are relative neophytes to patent law, but also those who have experience in this area, including venture capitalists and startup CEOs. Part of the seminar, Pymento says, is simply breaking down barriers. Terms such as “novelty requirement” or “date of conception,” he adds, have specific meanings that are not obvious to non-lawyers. “There isn’t much exposure for engineers to the patent law area until you’ve actually created a product and you’re trying to figure out, ‘What do I do next?’” Wu says. But because the four law students began their careers as engineers, they understand the knowledge gap that researchers frequently face.

Each kind of audience member has specific concerns, the team has noticed. Life science inventors, Hou explains, often ask about issues related to the enablement requirement in patent law. Likewise, software engineers are interested in subject matter eligibility, which determines whether an area of research is even patentable. Graduate students want to understand how authorship of a scientific paper is different from inventorship and whether poster presentations can preclude someone from receiving a patent. And venture capitalists have questions about how much the patenting process costs.

One point of pride, Hou says, is that attendees have benefited from the workshops in tangible ways. After attending the workshop at MIT, one MIT researcher decided to modify his lab and publication practices to avoid accidentally preempting his own patentability. Several attendees have also said they are glad to be armed with sufficient knowledge as they approach patent lawyers about their inventions. Others were fascinated by the material and asked the team to offer a two-day workshop.

To make the workshop even more accessible, the team is currently exploring ways to offer the course in South Korea, China, and Taiwan, presented in Korean and Mandarin, respectively. The NYU Law Institute for Executive Education is also supporting the team in developing marketing materials and examining opportunities to expand the workshop throughout the NYU community, including at NYU Stern School of Business.

For Hou and his teammates, the gratification of sharing their legal knowledge is rivaled only by the thrill of creating and delivering the workshops. “It has been a very entrepreneurial project,” Hou says. “It’s rare to have a project that you created on your own take off like this, with so many people across the world becoming interested.”