In an October 3 discussion, amid national debate over Christine Blasey Ford’s sexual assault claims against then-US Supreme Court nominee Brett Kavanaugh, Professor Melissa Murray and Professor Kim Taylor-Thompson looked back to the 1991 hearings over Clarence Thomas’s nomination to the Court to consider how much had changed in 27 years—and how much hadn’t. 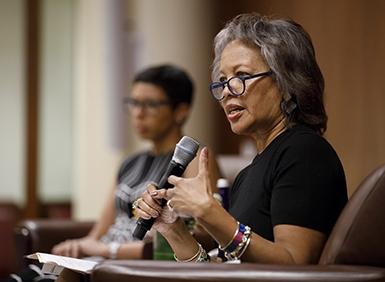 Each of the two NYU Law faculty members had played a role in the high-profile hearings: Taylor-Thompson was a member of Anita Hill’s legal team when Hill raised sexual harassment allegations against Thomas, and Murray testified before the Senate Judiciary Committee in opposition to Kavanaugh’s confirmation in early September, before Blasey Ford’s claims emerged. Their discussion was co-sponsored by the Birnbaum Women’s Leadership Network, which Murray co-directs; the Center for Diversity, Inclusion, and Belonging; and the Center on Race, Inequality, and the Law.

In the conversation with Murray, Taylor-Thompson recalled being unprepared for the accusatory nature of the Judiciary Committee’s questioning when Hill testified. “I remember sitting there and thinking that everything seemed larger than life and fundamentally warped,” Taylor-Thompson said. “… I fully expected that they would question her, and question her intensely, to test the credibility and the accuracy of her statements…but even as a seasoned defense attorney, I didn’t expect what she got.” Hill’s sanity and reputation were repeatedly called into question, Taylor-Thompson noted.

This acrimonious line of questioning was comparatively absent in Blasey Ford’s testimony regarding Kavanaugh’s sexual assault, Taylor-Thompson said, because the Republican majority delegated questioning to prosecutor Rachel Mitchell. But in both the Thomas and the Kavanaugh hearings, Taylor-Thompson said, the women who came forward were treated as if on trial, both were accused of playing a part in a political conspiracy to undermine the nominee, and both were forced to relive, in vivid detail, the specifics of their assault or harassment while trying to remain believable to the Committee. 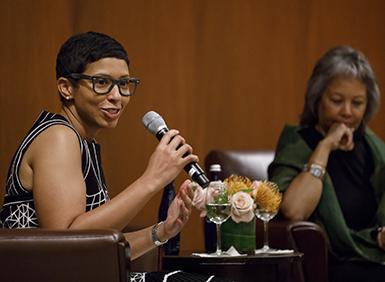 “Dr. Ford was praised for her vulnerability,” Murray added, “whereas Anita Hill was pilloried for her stoicism.”

Taylor-Thompson saw another difference between 1991 and 2018: Blasey Ford’s testimony came during the #MeToo movement, which seeks accountability for workplace sexual assault and harassment, but Hill testified at a time when discussing harassment was considered by many to be “airing dirty laundry,” said Taylor-Thompson. Moreover, she added, Hill’s reserve was read as ambivalence.

“Race was in play here,” Taylor-Thompson said. “And so her ability to not fit a stereotype and to be seen as somebody who was stoic, that was used against her. Imagine if she had been emotional or shown some level of vulnerability, then she would have been attacked for that.”

Blasey Ford and Hill’s testimony stood in stark contrast to the emotional testimony of the accused nominees.

“When I watched Kavanaugh['s testimony] the other day,” Taylor-Thompson said, “my first thought was that he had taken a page from Judge Thomas’ playbook. They both came out angry and swinging. They both called the hearings a ‘circus’ as though the issues being raised were somehow a sideshow to the real issues that were in play.”

Both Taylor-Thompson and Murray said that the Supreme Court’s credibility has been impaired in the Thomas and Kavanaugh hearings by contentious partisanship and a disregard for the women’s claims, including failure to thoroughly investigate their allegations.

“And I’m not sure that wasn’t the point,” Murray said. “We have an administration that has gone about completely undermining and delegitimizing every institution that would serve as a bulwark against excessive state power, whether it’s the media or opposition groups and now the Court.”

Watch video of their discussion: