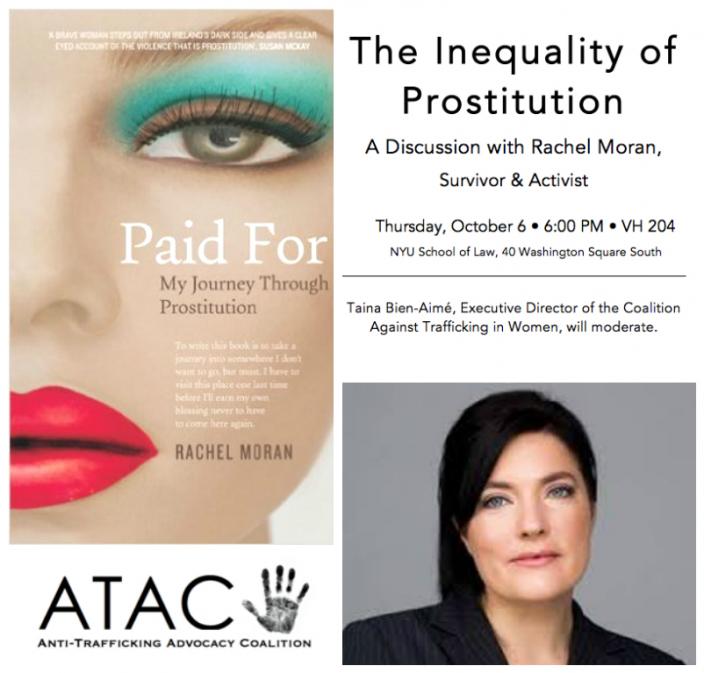 The Inequality of Prostitution: A Disussion with Rachel Moran and Taina Bien- Aime
Thursday, October 6, 6:00pm
NYU School of Law
Vanderbilt Hall, room 204
40 Washington Square South
Please join ATAC as we welcome Rachel Moran to discuss her own personal experience in trafficking and her work with SPACE (Survivors of Prostitution Abuse Calling for Enlightenment) which advocates for the Nordic model. Taina Bien-Aime, Executive Director of the Coalition Against Trafficking in Women (CATW), will moderate the event, with a Q & A to follow.
Moran’s seven years in the sex trade convinced her that it is never compatible with consent and always tantamount to abuse. She was prostituted for seven years in Dublin and other Irish cities, beginning when she was fifteen years old. She managed to extricate herself from prostitution in 1998, at the age of 22. In 2000 she returned to education and completed a degree in Journalism from Dublin City University. Moran has been involved in the political push for the Nordic Model in Ireland since she first addressed the crowd gathered at the launch of the Turn Off The Red Light campaign in February, 2011. She works in conjunction with the Coalition Against Trafficking in Women, the European Women’s Lobby, Equality Now, Apne App and the Coalition for the Abolition of Prostitution. Moran wrote a great memoir about her experience in trafficking and prostitution, "Paid For: My Journey Through Prostitution."
More information can be found on the Facebook Event Page and the NYU event page.
Note: This event is open to the public. If you are not a NYU School of Law student and would like to attend, you must RSVP.
Dinner and drinks will be served.

The Decriminalization of Prostitution: How changing legislation would affect efforts to combat human trafficking

NYU's Anti-Trafficking Advocacy Coalition is sponsoring a panel on the decriminalization of prostitution. Panelists will discuss the implications of the recent Amensty International recommendation for decriminalization, and how this will help or harm efforts to combat human trafficking.

The event will be moderated by Margaret Satterthwaite, the Faculty Director of the Center for Human Rights and Global Justice. Speakers include Jillian Modzeleski of Brooklyn Defender Services, Kate D'Adamo of the Sex Workers Project, Taina Bien-Aime of the Coalition Against Trafficking in Women, and Jayne Bigelsen of Covenant House.

This event is open to the public. If you are not a NYU School of Law student and would like to attend you must RSVP.

If you have any questions, please email Maria Mannarino at mcm560@nyu.edu

Please join the Anti-Trafficking Advocacy Coalition (ATAC) and the Domestic Violence Advocacy Project (DVAP) for our welcome reception in Golding Lounge. Meet fellow students and hear about the awesome work DVAP and ATAC have done and are planning for this year! Food will be served.

Please check back for updates on upcoming events!

Come by our mixer and meet the members of ATAC!

ATAC will be hosting a panel with prominent scholars and experienced practitioners on the subject of prostitution. Our guests will be offering insights on whether legalization of prostitution would help or hurt efforts to combat human trafficking. Lunch will be served.

Nancy Hoppock - Nancy Hoppock is the Executive Director of the Center on the Administration of Criminal Law here at NYU Law. Before joining NYU, Nancy served as the Executive Deputy Attorney General for Criminal Justice at the New York Attorney General's Office. Prior to joining the Attorney General’s Office, Nancy served as an Assistant United States Attorney at the U.S. Attorney’s Office in the District of New Jersey from 2001 to 2010, where she handled a broad range of federal criminal prosecutions. During her tenure at the U.S. Attorney's Office, Nancy was promoted to supervise the Government Fraud Unit, then became a Deputy Chief of the Criminal Division, and later the Chief of the Criminal Division. She was a recipient of the Department of Justice Director’s Award in 2010, for her work on the prosecution of a human trafficking case, United States vs. Afolabi. Nancy started her career at the Manhattan District Attorney’s Office, where she spent seven years as an Assistant District Attorney in the trial division. She received her B.A. from the University of Delaware and her law degree from Seton Hall Law School.

Taina Bien-Aime - Taina Bien-Aimé has over two decades of experience defending the rights of women and girls at the national and global level.  She is currently the Executive Director of the Coalition Against Trafficking in Women (CATW), one of the oldest international organizations dedicated to ending trafficking in women and girls and commercial sexual exploitation as practices of gender-based violence. Prior to this position, Taina was the Executive Director of Women's City Club of New York, an advocacy organization that helps shape policy in New York. She is also a founding Board member of and later served as the Executive Director of Equality Now (2000-2011), an international human rights organization that works to promote the human rights of women and girls. She was Director of Business Affairs/Film Acquisitions at Home Box Office (1996-2000) and practiced international corporate law at the Wall St. law firm, Cleary Gottlieb Steen & Hamilton (1992-1996). Taina holds a Juris Doctor from NYU School of Law where she received the Vanderbilt Medal. She earned a Licence in Political Science from the University of Geneva/Graduate School of International Studies in Switzerland. Taina has extensive public speaking and media experience, the latter including with the New York Times, Associated Press, Reuters, CNN, the Amanpour Show and many other print and television outlets.  She is a contributor to the Huffington Post.

Melissa Broudo - Melissa Sontag Broudo, Esq. is a senior staff attorney with the Sex Workers Project at the Urban Justice Center in New York City. Ms. Broudo provides legal advocacy, advice, and information to sex workers and survivors of trafficking on a variety of issues, including vacating convictions for survivors, violence against sex workers, and civil consequences of convictions. Prior to joining SWP, Ms. Broudo worked with various organizations that engaged individuals who are marginalized because of poverty, criminalization, or discrimination based on gender, sexual orientation, or HIV status. Ms. Broudo is also very active in the sex workers' rights movement and is a Board Member of three sex worker organizations: the PROS Network (Providers Offering Resources and Services to Sex Workers), Best Practices Policy Project, and the Desiree Alliance. Ms. Broudo graduated from Brown University, the Bloomberg School of Public Health at Johns Hopkins University, and Georgetown University Law Center.

Jillian Modzeleski - Jillian Modzeleski is a graduate of Virginia Tech University, where she received a B.A. in Political Science in 2002. Born and raised in Virginia, she moved to New York to attend New York Law School. Upon graduation from law school, in 2006, Jillian worked for the Honorable Judge Michael Corriero in the Youthful Offender Part in Manhattan. Jillian’s time as Judge Corriero’s court attorney sparked her passion for social justice, public interest and criminal defense work.

Jillian went on to work for the Children’s Law Center, representing children’s interests in custody, visitation, abuse and neglect cases. She worked exclusively in the Integrated Domestic Violence (IDV) Part of Brooklyn Supreme Court for 2 years, where she tried numerous cases.  Jillian joined Brooklyn Defender Services (BDS) in 2011.   Upon creation of the Human Trafficking and Intervention Part in 2013, she became the dedicated attorney for BDS in the part.  Working with a team of social workers and immigration attorneys, Jillian represents all of BDS’ clients whose cases are heard in the Human Trafficking and Intervention Part.

Tina Kelley - Tina Kelley is the co-author of Almost Home: Helping Kids Move from Homelessness to Hope, (Wiley October 2012), a national bestseller. She was a reporter at The New York Times for a decade, where she was part of the Metro section team that won a 2002 Pulitzer Prize in the Public Service category for coverage of the September 11 attacks. She wrote 121 “Portraits of Grief,” short descriptions of the victims. Her first book of poems, The Gospel of Galore, (Word Press, 2003) won a Washington State Book Award, and her second book, Precise, was published by Word Press in 2013. She works for Covenant House on issues including anti-trafficking advocacy.

ATAC will be hosting a screening of the documentary, "Very Young Girls." Very Young Girls is an exposé of the commercial sexual exploitation of girls in New York City as they are sold on the streets by pimps and treated as adult criminals by police.

We hope you'll be able to join us! Snacks and wine will be provided.

ATAC will be holding a potluck dinner to congratulate all the members who worked with our partnered organizations this semester on projects to combat trafficking. Thanks for making a difference!

Take a break from studying and join ATAC for some snacks.

The content on student group pages is created by each group and does not constitute official statements or views of NYU Law.

Subscribe to our newsletter by clicking here and adding “anti-trafficking-advocacy-coalition.”