The Center on Race, Inequality and the Law observes its first anniversary with a discussion of racial narratives in America

The Center on Race, Inequality and the Law (CRIL) celebrated its one-year anniversary at NYU Law with a discussion of “Truth and Reformation: A Conversation on Narrative, Identity, Race, and Rights” among leading four civil rights advocates. Anthony Thompson, professor of clinical law and faculty director of CRIL, moderated a panel that included Stephen Bright, lecturer in the law at Yale Law School and former president of the Southern Center for Human Rights; Paul Butler, professor of law at Georgetown Law Center; Maya Wiley, professor of urban policy and management at The New School and former chair of New York City's Civilian Complaint Review Board; and Vanita Gupta ‘01, president and CEO of The Leadership Conference on Civil and Human Rights.

Thompson noted that the panel discussion at last year’s CRIL launch event—what he called “a candid and surprisingly hopeful conversation” with Professor of Clinical Law Brian Stevenson; former US Attorney General Loretta Lynch; and Sherrilyn Ifill, president of the NAACP Legal Defense and Education Fund—had just been published in book form as A Perilous Path: Talking Race, Inequality, and the Law. 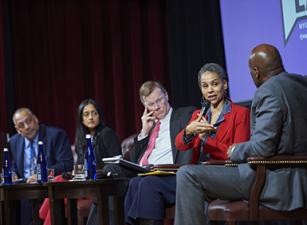 This year, Thompson opened the discussion by asking the other speakers to comment on racial narratives in America: in particular, the black man as criminal. Butler traced this narrative back to the post-Civil War South, when it was used as a method of social control, and cited an example of its continuing impact: Today, police officers are more likely to mistake an object as a gun if it’s held by a black man.

“Every African American man, every time we leave our home, we have to engage in some kind of performance to show the world that we’re safe, we’re not going to hurt you,” Butler said. “It could be wearing our NYU Law sweatshirts, prominently displaying our work IDs, but there’s always something.”

“I always believe we can have policy wins and we can win in the courts and try to save some lives,” Gupta said, “but until we are fundamentally able to transform the racial narratives in this country, we are not going to be able to get out of racism.”

Video of "Truth and Reformation: A Conversation on Narrative, Identity, Race, and Rights":

“A Conversation on the Intersection of Race, Inequality and Private Law Firm Practice”
NYU Law website 10/24/2017