At the 2015 Attorney General Robert Abrams Public Service Lecture on September 21, US Senator Heidi Heitkamp of North Dakota urged students to be leaders and proponents for positive change, with a unique twist. “Going into public service will be the most selfish thing that you ever do—because it will give you a sense of self-worth,” she said, adding, “It will give you a sense of mission and purpose that will build your character for years to come.” 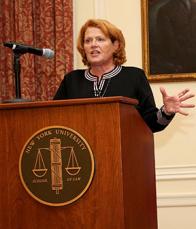 Heitkamp shared lessons learned over the course of a lifetime, through stories of personal triumph and professional achievement. The fourth of seven children, she grew up at a time she said, when it was “unheard of for a woman to be a lawyer”—a woman would be scoffed at for choosing to be anything other than a schoolteacher, secretary, nurse, or airline stewardess. “People your whole life will tell you that you can’t,” Heitkamp reflected. “Well, that just makes me more determined to do it.” She would go on to study law, serve as North Dakota’s attorney general, overcome breast cancer, and win a Senate seat as a Democrat in a primarily Republican state.

Insistent that students pursue leadership and take risks, Heitkamp used Jeffrey Amestoy, former chief justice of the Vermont Supreme Court, as an example. Amestoy wrote the opinion in Baker v. Vermont, which ordered the state legislature to accord same-sex couples the same rights as opposite-sex couples—eventually resulting in Vermont’s becoming the first state to legalize same-sex civil unions. “That started a revolution—because someone was brave enough to bring the case, and Jeff was brave enough to write the decision,” Heitkamp said.

“Every day in America there are people who step up, challenge the dominant thinking, and they do it at great risk to themselves,” she said, acknowledging the potential for devastating political outcomes. “But at the end of the day, I will always remember Jeff Amestoy’s name.”