Earlier this month, NYU Law’s Institute for International Law and Justice organized a lunchtime talk with Roberto Azevêdo, the director-general of the World Trade Organization. Azevêdo assumed office in 2013 and counts among his accomplishments the successful negotiation of the “Bali Package,” an agreement aimed at lowering global trade barriers such as import tariffs and agricultural subsidies. The public discussion covered a wide range of subjects, with additional questions from the audience. 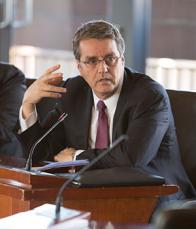 One early topic was President-Elect Donald Trump, who promised during his campaign to shake up America’s trade policy. When asked if he had met with Trump’s transition team to talk about strategy, Azevêdo responded that he had not. “I think the decision of when to meet and discuss the future of trade policies in the US and globally is whenever they are ready,” he said. “We are ready any time.”

From there, the conversation moved to Azevêdo’s work at the WTO and the increased multilateralism the organization has implemented since his coming onboard. Part of the effort, said Azevêdo, is to shift the organization’s focus from “rounds” of negotiation to an ongoing forum for easing the flow of trade between nations. “There is a transition between putting all your eggs in the basket of a big round, and maybe complementing that effort with other things that make the multilateral system work.”

For the second half of the talk, the floor opened to questions from the crowd. One question Azevêdo gave particular attention to concerned trade liberalization and protectionism. Despite the WTO’s portrayal in the media, Azevêdo said, the organization does not act as “police” to monitor its member countries, but instead leaves it to members to monitor one another. The WTO does, however, keep an eye on “trade-restrictive measures” between members and responds to trade disputes.

Azevêdo spoke about the organization’s success in easing those conflicts, pointing out that 90 percent of disputes the organization handles are settled. He also described a marked increase in not only the number but the complexity of cases and the WTO’s struggles to keep up despite limited resources.

“The End of Alchemy: Mervyn King considers the future of banking and the global economy”
NYU Law website, 6/1/16