University Professor Jerome Bruner—a trailblazing figure in psychology and a towering mind in a multitude of other disciplines—passed away on Sunday, June 5.

In the 1960s, Bruner helped spearhead a revolution in psychology, emphasizing learning through interpersonal interactions and exploring such topics as how we gain meaning through those interactions as well as how the mind deals with the limited information it is given. 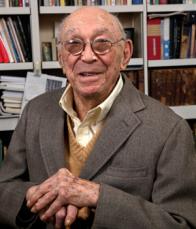 While a professor at the Law School, Bruner interwove psychology, literature, philosophy, anthropology—almost every aspect of the humanities—into his teaching, illuminating numerous points of intersection between law and culture. His colleagues hailed him as the “Pied Piper of interdisciplinary wonder.”

Bruner left a mark on the world beyond academia as well. He served on the President’s Science Advisory Committee during the Kennedy and Johnson administrations, and was a force behind the federal preschool program Head Start. Furthermore, his contributions helped shape modern views of both psychology and education. In an e-mail, Howard Gardner, Hobbs Professor of Cognition and Education at the Harvard Graduate School of Education, wrote, “I think that he was the most important contributor to educational philosophy/psychology in America since John Dewey—and there is no one like him today.”

After graduating from Duke University in 1937, Bruner earned his PhD in psychology from Harvard in 1941. He held faculty positions there and at Oxford—sailing his own boat across the Atlantic to take up that post. He co-founded and served as director of the Center for Cognitive Studies at Harvard, and served as president of the American Psychological Association. He brought his sense of wonder about the human mind to NYU Law in the 1980s, where he delved into the relationships among law, culture, and society. His 10 years teaching at the Law School began in 1991 as a Meyer Visiting Professor, collaborating with University Professor Emeritus Anthony Amsterdam, John S. R. Shad Professor of Lawyering and Ethics Peggy Cooper Davis, and Russell D. Niles Professor of Law Oscar Chase. He became a University Professor in 1998 and taught Lawyering Theory seminars, the Colloquium on Culture and the Law, and other topics.

Among a number of awards and accolades, Bruner was a recipient of the International Balzan Prize, the CIBA Gold Medal for Distinguished Research, and the Distinguished Scientific Award of the American Psychological Association. Duke University offers the Jerome S. Bruner Award for Excellence in Undergraduate Research, an honor bestowed upon Duke’s most promising undergraduate researcher in the senior class.