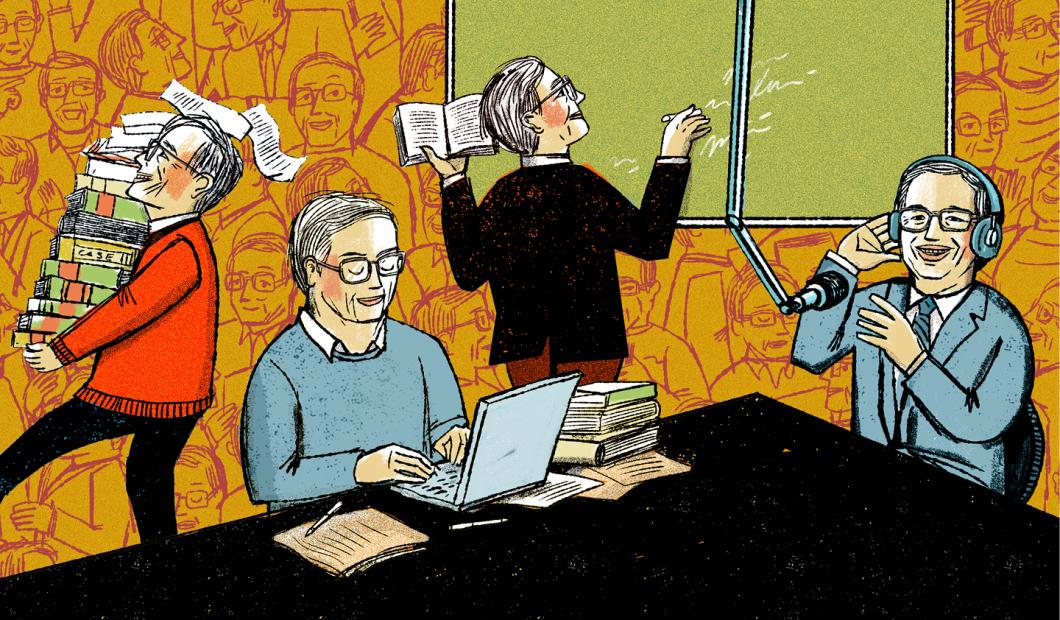 Google “Richard A. Epstein” and “prolific” and you’ll get plenty of hits. Other searches will produce multiple items documenting that Epstein, who is the Laurence A. Tisch Professor of Law, has long been one of the country’s most productive and influential legal scholars. On April 20, NYU Law and the University of Chicago Law School (Epstein’s former academic home, where he is now a senior lecturer) will jointly sponsor an event in Chicago to honor Epstein’s 50-year career. Even focusing just on the most recent quintile of his career—since the fall of 2007, when he began teaching regularly at NYU—there is plenty to celebrate, as his output and activity have continued at a brisk pace.

Scholarly productivity has long been assessed by quantifying traditional publications, and Epstein has no shortage of those. Between September 1, 2007, and March 1, 2018, he authored 123 academic journal articles and 30 book chapters; he also wrote or edited 10 books.

To focus only on Epstein’s academic writing, though, is to miss a substantial portion of his oeuvre. A leading exponent of libertarian (or, in his preferred formulation, “classical liberal”) thought, Epstein is a multiplatform threat, disseminating his ideas on myriad topics through online columns, podcasts, radio broadcasts, Twitter, and other outlets.

The conservative website Ricochet, which features Epstein on podcasts, referred to him in a tweet as “The Human Paragraph.” Words, Epstein acknowledges, flow easily for him. “If you can get yourself to a topic sentence,” he says, “you can usually see a problem through to the end.” Credit Epstein with more than 450 topic sentences for the opinion pieces he has written since August 2008, primarily for Defining Ideas, an online journal of Stanford University’s Hoover Institution, where Epstein is a senior fellow. Based on their average length, these pieces total about 750,000 words. Under "The Libertarian" moniker, he's done hundreds of podcasts for Hoover, as well.

By his own estimate, Epstein delivers between 75 and 100 lectures and talks a year. During a two-day visit to Philadelphia this February, he delivered four, all without notes, as is typical for his appearances. “If you like to talk, it’s not a great burden,” he explains. With material from a single five-hour recording session, the Federalist Society has produced a YouTube playlist featuring 14 brief videos of Epstein explaining the common law and plans to post nine more this summer on contracts as well as additional segments next year on torts.

“They put me on a stool and said, ‘Start talking,’” Epstein recalls. “Pretty soon it was like a rock rolling downhill.”

Employing yet another medium, Epstein has done two “Ask Me Anything” interviews on Reddit, the social news and media site.

Beyond how much he produces, Epstein scores high on another metric for law professors: influence. The yardstick for this is law journal citations, and Epstein ranks in the upper echelons in a tally published in 2014 as well as in a current count in the HeinOnline database that includes citations over the past decade. Courts also cite his scholarship frequently.

Less amenable to measurement, but still emblematic of Epstein’s influence is the Classical Liberal Institute (CLI), which he co-founded at NYU Law in 2013 with Mario Rizzo, an economics professor at NYU. CLI shapes law, policy, and scholarship through its conferences, publications, and fellows program and works closely with its affiliate scholars even after they leave NYU.

Of final note is the breadth of Epstein’s scholarship and teaching. Among the topics he wrote about just in 2017, for example, are patents, right-to-work laws, takings law, Brexit, and Kantian moral theory. Over the course of his career, he has taught courses on 30 different subjects (16 since arriving at NYU Law), including Roman law, military law, and water law. “I will write or teach about anything, and happily learn as I teach,” he says.