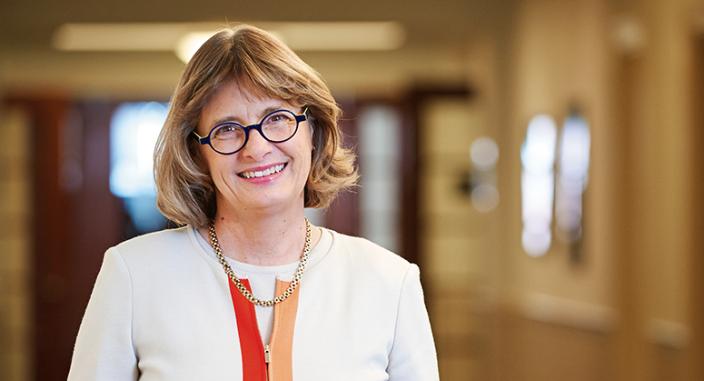 Vicki Been ’83, Boxer Family Professor of Law, has returned to NYU Law from a three-year leave during which she served as commissioner of the New York City Department of Housing Preservation and Development (HPD), the nation’s largest municipal housing agency.

One of Been’s key accomplishments in her time at HPD was the successful creation and launch of a 10-year plan to build or preserve 200,000 affordable apartments for New Yorkers in all five of the city’s boroughs. By the time Been departed the agency, the plan had already financed the construction of nearly 21,000 new homes and preserved the affordability of over 41,000 existing ones, putting the city ahead of schedule.

As she returns to teaching and her position as faculty co-director of the Furman Center for Real Estate and Urban Policy, Been will shift from a local to a federal focus. “We’ve built a lot of the foundation over the past three years that is needed to get that affordable housing built,” she says, “but now the big challenge is going to be on the federal front. This is an area where the Furman Center’s work can be particularly helpful in showing the federal government the value of affordable housing.”

Having long been a researcher providing data to government agencies, Been returns to research and analysis with a deeper understanding of the exigencies on the other side. Articulating her view that the Furman Center’s research needs to be increasingly timely going forward, she adds, “I have a much better appreciation for the government’s need to make decisions in a hurry under conditions of great uncertainty…. Academics always strive to have the most thorough, the most accurate, the most perfect research, but there’s a tradeoff there. I think I’ve learned a lot about that tradeoff and how to balance those competing needs.”

Been’s stint as commissioner has also prompted her to undertake a new book on how cities should respond to community fears of gentrification and the resulting neighborhood changes. She will collaborate with former colleague Carl Weisbrod, who recently stepped down as director of the New York City Department of City Planning and chairman of the New York City Planning Commission.

“The most difficult problem that I faced as commissioner was working with communities who were afraid of development because they were afraid of displacement and gentrification,” says Been. “That’s a nut that no city has really cracked well, and we were certainly trying on a variety of fronts to address that problem.”

Apart from the 10-year plan, Been’s proudest accomplishment as commissioner was the passage of Zoning for Quality and Affordability, a 400-page amendment to the city’s existing zoning rules. The zoning enhancements, she explains, drew heavily on Furman Center research from the past decade.

“Zoning for Quality and Affordability got rid of a lot of inefficient and burdensome regulations,” says Been. “It really opens up affordable housing and senior housing especially…. It was a very direct way in which all the research that we did at the Furman Center and the work that I had done as an academic came into very real focus and produced change.”