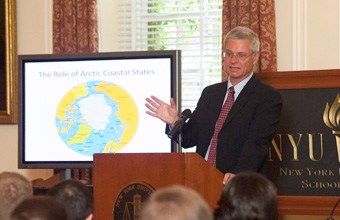 After introductory remarks by Herbert Rubin '42, founder of Herzfeld & Rubin, and José Alvarez, who is Herbert and Rose Rubin Professor of International Law, the keynote lecture was delivered by Peter Taksøe-Jensen, the Danish ambassador to the United States and former United Nations assistant secretary general for legal affairs. Taksøe-Jensen described the current state of the Artic Ocean, and the potential for changes in access to the region. During summer months, Taksøe-Jensen said, more and more ice is melting each year. This is creating uncharted waters in the arctic region, allowing for potential new trade routes, tourism, and migration of marine life. One of the consequences is a new tension between the countries that border the Arctic as they plan for regulating this new area.

The first panel delved further into Taksøe-Jensen’s introduction, setting its sights on recent changes in the Arctic region and the responses of various nations to those changes. Moderator Peter Miljanich '11, editor-in-chief of the Environmental Law Journal, paced the discussion, which featured: Betsy Baker, an assistant professor at Vermont Law School; Lisa Speer, director of the Natural Resources Defense Council’s International Oceans Program; and Ross Virginia, Myers Family Professor of Environmental Science at Dartmouth College. Panel two, moderated by NYU Journal of International Law and Politics Symposium Editor Margaret Graham '11, discussed the United Nations Convention on the Law of the Sea. Professor Katrina Wyman moderated the third and final panel, which explored the domestic and international approaches to conserving the diverse and vulnerable marine ecosystems in the Arctic region from the increasing threats of overfishing, ship strikes, and pollution from new commercial activities.