A former student of Derrick Bell’s, Ian Haney López, John H. Boalt Professor of Law at the University of California Berkeley School of Law, gave the 16th annual Derrick Bell lecture on November 2, on “Justice Undone: Color Blindness After Civil Rights." Lopez, who teaches race and constitutional law argued that, as Bell himself foresaw in his book Faces at the Bottom of the Well: The Permanence Of Racism, racism continues to be entrenched in the politics, courts, and culture of the United States.

López proposed that in order to understand race and law, it is important to step outside of the courts, and to examine electoral politics. Beginning with the politics of George Wallace, López gave a brief overview of the ascendancy of the Southern strategy, which López defined in two parts: “A., Republicans can win if they can break the New Deal coalition that put together white members of the working class, Northeast elites, and blacks, and B., They can do that through coded racial appeals to the Republicans.  They don’t need black votes to be elected, so there’s no cost to going after those votes.”

When Richard Nixon adopted this strategy, López said, he began to emphasize racially coded issues that included neighborhood stability, forced bussing, welfare, and law and order. “The Southern strategy is really a version of color-blind racism. It is color blind in that it never directly refers to race, but it seeks to stoke racism through the use of coded language,” López said.

The Southern strategy has, according to López, become the dominant political strategy of the United States: “It is now just the basis on which Republicans and Democrats compete for the presidency.”

Drawing a connection between the dominance of this strategy and the election of conservative judges to courts, López argued that the rise of the Southern strategy has led courts to rule against legal efforts towards equality that explicitly address matters of race, while protecting what he calls “color blind racism,” i.e., racism that takes place outside of the language of race. As an example, he noted that since the late 1980s, in every affirmative action case to come before the Supreme Court but one, the Supreme Court has ruled it unconstitutional. The implication of this, López claimed, is that the government cannot consider race at all with respect to policymaking.

López emphasized Bell’s foresight in writing about these issues nearly two decades ago, when López was his student. “It has taken me a long, long time to recognize the fundamental genius of Derrick Bell,” López said. “He could see the connection between the “them” and the “us,” between the subordinated and the privileged…. And it’s when you think about what’s happening to all of us in this society, that Derrick Bell seems prescient in 1991, when he writes about the permanence of racism. Because the great promise of the Civil Rights movement has slid into irrelevance. It was a temporary peak of progress. But race reconsolidated in a way that ultimately did maintain the racial status quo, and in fact made everyone worse off in our society.” 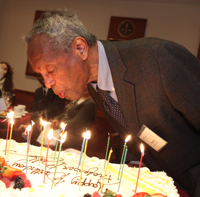 This year’s lecture was, as Dean Richard Revesz remarked, “a bittersweet moment.” Derrick Bell, a full-time visiting professor at NYU Law since 1990, passed away on October 5, 2011. This year the lecture served as a tribute to his memory and life’s work. Bell’s family, including his wife, Janet Dewart Bell, his sister, Janet A. Bell, and his sons, Derrick Bell III, Douglass Dubois Bell, and Carter Robeson Bell, were all in attendance.

The lecture series kicked off in 1995 in celebration of Bell’s 65th birthday. The format included plenty of music, as well as a rendition of “Happy Birthday.” This year was no exception. Following a performance of “There’s a Sweet Sweet Spirit in this Place” and “Some Children See Him” by soloist Kimberly Hughes, Janet Bell led the audience in singing Stevie Wonder’s version of the birthday song.