Holbrooke declares Afghanistan a growing and enduring problem for the U.S. 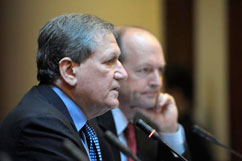 In a bold, forceful keynote speech on October 17, former U.N. Ambassador Richard C. Holbrooke forecast that the so-called “forgotten war in Afghanistan,” now in its seventh year, would eventually be the longest in American history, surpassing even Vietnam. “Success, however you define it, is not going to come easily,” he said in the keynote address at “Afghanistan Today: Drugs, Detention and Counterinsurgency,” a day-long conference hosted by the NYU School of Law Center on Law and Security and co-sponsored by The New America Foundation.

A former assistant secretary of state to Bill Clinton who negotiated the 1995 Dayton Accords in Bosnia, Holbrooke had been pegged as a likely secretary of state had Hillary Clinton won the presidency. With Barack Obama as the Democratic candidate, however, Holbrooke’s prospects are less certain, due to his well-publicized rivalry with Anthony Lake, Obama’s top foreign-policy adviser. 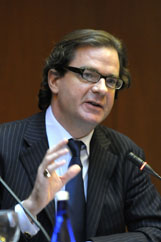 Saying he was relating his own personal views, not those of the Obama campaign, Holbrooke offered a blistering critique of U.S. missteps in Afghanistan which he said had led to the resurgence of the Taliban, increasing violence and record-high levels of illegal drug production. “Right now,” he said, “there is more expertise about Afghanistan in this room than there is in the entire Bush administration.” Among those in the room: Barnett R. Rubin, director of the program on the reconstruction of Afghanistan at NYU’s Center on International Cooperation, and Michael Sheehan, a fellow at the Center on Law and Security and former deputy commissioner for counterterrorism in the New York City Police Department.

Besides singling out the decision by former Defense Secretary Donald Rumsfeld to withdraw troops from Afghanistan, Holbrooke condemned the U.S.-led drug eradication program, which he called “the single worst American foreign-assistance program I have seen.” “This is not only a waste of money, but it actually helps the enemy,” he argued. “It’s a recruiting tool for the Taliban. . . . What they’re really doing is helping one drug guy against another in a local competition for market share. Drug eradication will succeed only if drug lords, rather than small farmers, are targeted – and only if Afghanistan’s economy is rehauled with irrigation projects, new roads, and the distribution of seeds and fertilizer,” he said. 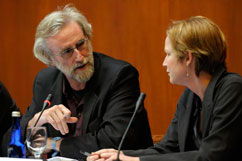 Holbrooke endorsed the need for more U.S. and NATO troops to counter an increasingly powerful Taliban. But he cautioned that a military response must be carefully calibrated to avoid triggering a backlash of xenophobia. And he said that Americans must understand that the re-engagement in Afghanistan would be a long and costly project, but necessary to counter al Qaeda’s spread. “The Bush administration did not level with the American public about the long-term nature of this war, and the next American president must,” he said. “If it matters to us, we have to hunker down for the long haul.”