US Supreme Court Justice Elena Kagan’s visit to NYU Law on April 4 occurred during a crucial national moment for the Court. The eight current justices face the possibility of multiple tie votes in some of their most contentious cases as the White House and the Senate engage in a protracted battle over President Obama’s nomination of a successor to Justice Antonin Scalia in a presidential election year. 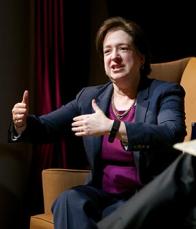 Kagan engaged in a wide-ranging dialogue with Dean Trevor Morrison before a full house in Tishman Auditorium, then served as chief justice for the final argument of the Orison S. Marden Moot Court Board Competition. She reflected on the loss of Scalia, who was a close friend of Kagan’s despite their considerable jurisprudential differences.

“I just loved Justice Scalia, and I miss him every day,” said Kagan. More significant, she added, “He was a big presence at argument, and trying to figure out argument in his absence is actually a little bit disconcerting, because there’s such a hole where he used to be. He was similarly a big presence at conference…. His voice carried great weight, and what he said was always sharp and to the point. It’s a gap that his voice isn’t there.”

Beyond the personal loss, Kagan said, she and her fellow justices are dealing with the complications arising from an eight-member Court. “I think we always work hard to reach agreement, but I think we’re especially concerned about that now. I will say there is a reason why courts do not typically have even numbers of members.”

In a lighter vein, Kagan described her experience of being the junior justice for the past five and a half years. One of her duties as the newest member of the Court is to answer the door during conference and hand off certain items to her colleagues.

Later that afternoon, Kagan joined Judge Thomas Griffith of the US Court of Appeals for the District of Columbia Circuit and Judge William Fletcher of the US Court of Appeals for the Ninth Circuit to judge the Marden Moot Court final argument. The fictitious case pitted petitioner William Bohemia, chief marketing and outreach officer of a bar examination preparation company, against Nicola Magnussen, director of adoption services for the state of New Amsterdam, and Doyle Media, on whose radio network Magnussen identified Bohemia while divulging allegations that derailed Bohemia’s adoption attempt.

Marden finalists Sean Stefanik ’16 and Alexander Levine ’16 argued for the petitioner, while Kevin Benish ’16 and Gabriel Panek ’17 represented the respondent. Stefanik and Benish addressed whether the domestic relations exception to federal jurisdiction applies in federal question cases, while Levine and Panek tackled the question of how much protection the media receives when it disseminates untruths about a public figure.

The latter issue led Kagan to pose a series of questions to Levine regarding how to define someone as a broad or “limited-purpose” public figure (Bohemia, with 6,000 Twitter followers, being an arguable case). The examples the justice offered elicited laughter from the audience when she mentioned Bachelor contestant JoJo and YouTube chanteuse Rebecca Black.

After deliberation, the judges named Stefanik as Best Oralist, awarding him the honor for a second consecutive year. The panel’s members then offered final thoughts as well as general praise.

Griffith stressed the importance of strong brief-writing skills alongside prowess in oral argument, while Fletcher expressed his admiration for the student advocates: “You are well above almost every lawyer I see: the level of preparation, the command of the facts, and so on.”

Kagan had some practical advice: “What you have to understand is that the judges are asking the questions at the weakest links in your argument…. You have to really look at it as an opportunity to convince the judges otherwise.” She also offered high compliments: “All your hard work and preparation showed, and we are very grateful to have been the recipients of it…. You were a great credit to NYU and to your friends and family.”