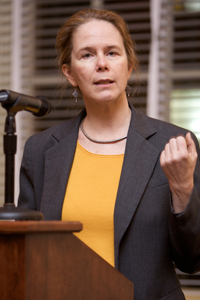 Hoff Sommers called into question the idea that women can be treated as a single voting block. “The issues that concern women in the upcoming election are identical to the issues that concern men,” Hoff-Sommers argued. “There isn’t a women’s perspective; women are variegated.” According to Hoff-Sommers, the economy, as well as healthcare and the affordable care act, are among the most important issues at stake this fall, for both women and men.

Uttley agreed that the affordable healthcare act would be a significant issue in the upcoming election, but also stressed that it is an issue with particular importance for women. “We’ve seen insurance companies told that they cannot deny coverage to children because they have a pre-existing condition," she said, noting that in 2014 this will apply to adults as well. “And for women, traditionally some of those pre-existing conditions have included things like having once had a C-section delivery… having been raped, or having been a victim of domestic violence. Women should not be able to be denied health insurance because of those kinds of pre-existing conditions.” 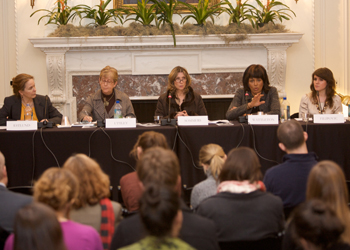 When the debate turned to abortion rights, Hoff-Sommers cited polling data showing that while 34% of American women believe that abortion is morally acceptable, 51% of American women believe that abortion is morally wrong. “The nation is engaged in a contentious argument over a moral dilemma,” said Hoff Sommers, who identified herself as pro-choice. “I find it appalling that there is such a disregard for what is in fact a majority of our countrymen who view it differently, and some passionately. Rather than attack them as somehow engaged in some kind of dark conspiracy against women’s bodies, we have to understand why they hold these positions… and why it’s not going away as a moral question.”

“Those of us who have fought very long and hard to protect that capacity to make the personal decision really should not always be cast as contentious and confrontational,” Wattleton countered. “Most of us really do understand that people do struggle with this decision. The issue is not about whether you struggle, the issue is whether the government gets to make that decision for the woman. And that’s where the heart of the matter has resided.”