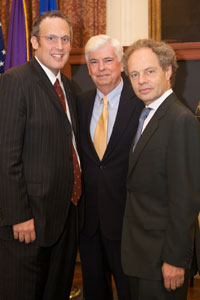 Senator Chris Dodd was the keynote speaker at the Law School’s 2010 Global Economic Policy Forum on Oct. 12. Chairman of the Senate Banking Committee, Dodd focused his talk on recent measures Congress has taken to protect consumers in their dealings with financial services firms. In particular, he discussed the Dodd-Frank Act, which, among other things, established the new Consumer Financial Protection Bureau (CFPB). President Barack Obama signed it into law in July. “We cannot legislate against crisis,” the Connecticut Senator said. “But what we can do—what I hope we have done—is to build safeguards for the American people, so they know that they won’t get ripped off or see the economy collapse around them.”

Dodd offered an inside glimpse at the legislative battle to pass Dodd-Frank, including some of the wheeling and dealing that went on to overcome stiff Republican opposition to a number of provisions. He also discussed the upcoming appointment of the CFPB’s first director, and the potential confirmation battle that might ensue. Elizabeth Warren has long been seen as a likely candidate for that post; a Harvard Law professor, she chaired the congressional oversight panel that was created to investigate the recent financial crisis, and in September, Obama named her as a special adviser to oversee the organization of the CFPB. But Warren, a longtime critic of financial firms, may be vigorously opposed by Republicans. Dodd said that he would support her if she were nominated, but that he also wanted to the president to name someone who was confirmable.

In brief remarks preceding Dodd’s address, Dean Richard Revesz noted that, thirty years ago, while a law student at Yale, he had worked on Dodd’s first Senate election campaign. The Global Economic Policy Forum was co-hosted by the Jacobson Leadership Program in Law and Business, the Lester Pollack Center for Law and Business, and the Center for the Study of Central Banks.