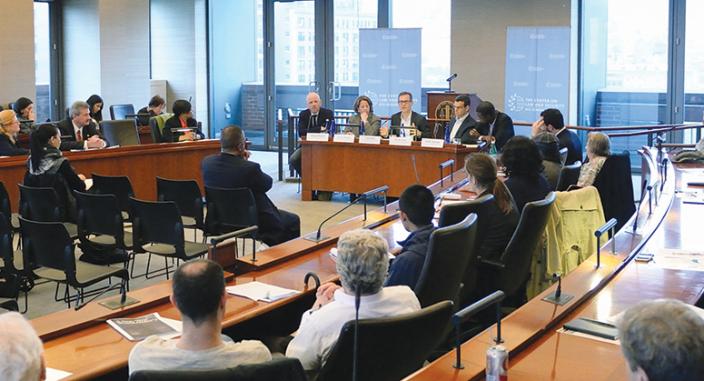 As North Korea, China, Russia, Syria, ISIL (or ISIS), and cybersecurity dominated the headlines, NYU Law’s Center on Law and Security (CLS) served as a locus for in-depth examinations of key national security issues. Events have focused on terrorists’ use of social media, the shifting strategic territory of counterterrorism and the law, and the Middle East and the Trump administration.

The group expressed alarm over what they deemed the lack of strategy on numerous fronts. According to Cohen, the Trump administration operated under a “policy of maximum pressure” with North Korea in order to enter into negotiations with Kim Jong-un. Cohen argued that this engagement is dangerous: “I’m concerned that we are manufacturing a crisis with North Korea in a situation where we don’t know what our endgame is.”

This lack of strategy extends to counterterrorism, Monaco noted. She observed that while the ongoing strikes in Iraq were a continuation of the approach pursued by President Obama, it was unclear how the current administration would address ISIL’s ability to deploy foreign fighters and exploit social media. “The immigration and travel ban feeds into ISIS’s recruiting narrative—that the West is in a war against Islam,” said Monaco. “Far from having a strategy to counter ISIS, we’ve seen one step that feeds it.”