Derrick Bell, full-time visiting professor of law at NYU for more than 20 years, was remembered at Riverside Church on November 3 in a moving service that honored him as a teacher, scholar, activist, father, lover of music, and a man. Among the luminaries who knew and gave tribute to Bell were feminist Gloria Steinem, Harvard law professor Charles Ogletree Jr., and opera diva Jessye Norman, who sang Amazing Grace. Former students who remembered Bell included Lisa Boykin ’95; Joy Radice, ’03, Acting Assistant Professor of Lawyering; Taja-Nia Henderson ’05; Anjana Samant ’01; and Vinay Harpalani ’09. Below is the prepared text of the eulogy by NYU President John Sexton, dean emeritus and Benjamin F. Butler Professor of Law, who had also been a student of Bell's.

Derrick Bell—a seeker and lover of truth, a radical in the sense that he chose to live ethically in a deeply flawed society—a son, husband, father, brother—a colleague, mentor and friend—a scholar who spoke and wrote the truth of his own profound and deeply scarred experience of injustice with honesty and eloquence, and who drew deeply from a well of forgotten faces. 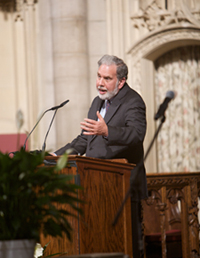 His devotion to God and enduring faith, his strong and loving parents, Derrick Albert and Ada Elizabeth Childress, and his magnificent partners in life, Jewel and Janet, enabled him to use his passion and courage to build up rather than tear down, to give more than he received, and to marshal his abundant knowledge and goodness in service to others.   And we embrace this evening the whole Bell family, which he so loved: his wife, Janet Dewart Bell; his children, Derrick Albert Bell III, Douglas Dubois Bell and Carter Robeson Bell; his two sisters, Janet Bell and Constance Bell, and his brother, Charles Bell.

Derrick belonged to the whole of society: his gifts were universal and given universally, and because this was so, those of us who have chosen a life of the mind are proud that he made his home in the academy.

And we at New York University are especially grateful that he lived and worked among us for so long—this preeminent figure in American law, this great scholar and author, teacher and activist, groundbreaker in civil rights law.  I cannot help but think that NYU Law was made for the likes of Professor Bell.  We shared with Derrick our affirmative lack of contentment and constant striving to do better.  It is part of our being New Yorkers and living in Greenwich Village.  We are deeply honored that he saw fit to place his papers in New York University’s Archives, and that this great legacy has a permanent home with us.  Even as his name will live on through the Derrick Bell Lecture on Race in American Society established over 15 years ago by Janet with the support of friends. 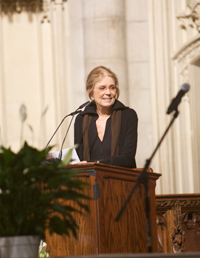 I am personally honored to share with you some precious memories of my relationship with Derrick and the special women in our lives.  We proudly wore the badge of feminists.  How could it be otherwise, when you think of Janet, of Jewel, and of Lisa? …

I believe that a university, as it pursues its principal mission to discover and transmit knowledge, fulfills that mission best when it is a sanctuary for the expression of unpopular truths, a place where someone who chooses to rock the boat, as Derrick did choose, may not only survive but even thrive.

He wrote and spoke with powerful authenticity about race in ways that alienated not only many an adversary but also many a friend, some who even begged for his silence.  But he knew that the cost of silence to his soul could exceed the sacrifice of good opinion and material goods to himself.

Derrick’s example reminds me of Emerson’s observation:  "Is it so bad, then, to be misunderstood? Pythagoras was misunderstood, and Socrates, and Jesus, and Luther, and Copernicus, and Galileo, and Newton, and every pure and wise spirit that ever took flesh. To be great is to be misunderstood."

Derrick chose to speak and write in parables. He created his own way of teaching about race through allegorical conversations stripped of pretense and euphemism.

He examined complex dynamics of behavior through the simple need to hear and tell stories, among the most ancient of human tools, and a requirement that Reynolds Price called “only second in [apparent necessity] after nourishment and before love and shelter.”

He gave his whole heart and mind, telling us how he had failed and would fail, yet finding meaning and worth in having made the effort, been willing to struggle, even being willing to see the eradication of racism as impossible—a conclusion that served not to defeat him, but rather to liberate him, so that he could take greater joy and meaning in even the smallest advance.

That was his truth, and it brought him humility and renewed determination.  He knew that he was meant to strive, to struggle, and to push.  There would be no short cuts.

He found that ethical behavior not only makes us stronger but makes us richer, or as he put it, in his direct and accessible way: “the satisfaction of choosing ethically enriches the fabric of our daily lives in ways we might otherwise have thought impossible.”

Listen to his admonition to us: “Let our sense of success be far broader and deeper than us and our kin. Let it inform the choices we make, big and small, public and unseen. We need not aim for sainthood, but by striving to choose ethically—no matter the ‘success rate’ – we will have a cumulative wealth of knowledge and experience to draw on and pass on that will pay dividends throughout our lives and beyond. Through our choices, day by day, we will be the success we aim for.”

Yes, Derrick rocked the boat.  He also shook the tree, yielding fruits of exceptional scholarship that nourished the discipline of law and thousands of colleagues, students and friends, whom he inspired to teach each other the law and to stand up, speak out, and find joy and satisfaction in stretching the boundaries of justice.

He placed his courageous and ardent protests within a crucible of reverence for every human being—nurturing rich and rewarding relationships through lifelong and constant love and care for others.  In huge ways and in small ways and in a million ways, he was our steadfast friend—imparting to each of us his intensely gracious, urbane, erudite, loving, soft-spoken, kind, and gentle ways.

Derrick never closed his heart, never quit striving, never gave up; and he continued to trust.  The bitterness and hatred that he had every reason to embrace, he chose to reject.

Finally, all these choices were nothing less than the treasures of a truly magnificent and precious legacy of the human spirit. A life fought hard, yet a life gracefully, beautifully, and freely given.

He left us many treasures, but none more courageous or taken at greater personal cost than his repeated willingness to step outside the circle, so that the circle might enlarge—whether in churches, neighborhoods, schools, swimming pools, or university law faculties. 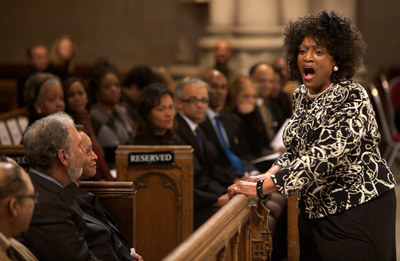 For a man of immense warmth and collegiality, who took great joy in community, his choice of self-imposed exile from those he loved and enriched, and who in turn honored and revered him, were acts of exceptional courage, fraught with troubles that he bore, nonetheless, with characteristic grace and humility.

As we remember him, honor and cherish him, may we choose to walk in ways that kindle the love and joy he infused in us all.  And may God grant rest to his immortal soul.

The Derrick Bell Official Site, created in honor of Professor Derrick Bell and in recognition of his unparalleled career as a civil rights attorney, legal scholar, professor, and political activist.