Former President of the Supreme Court of Israel Dorit Beinisch made her teaching debut this fall while on campus as a distinguished global fellow and a senior fellow at the Center on Law and Security. The class she co-taught with Associate Professor Samuel Rascoff: Judging National Security. 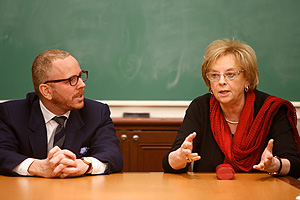 “The comparative national security area has been understudied,” says Rascoff, faculty director of the Center on Law and Security and former director of intelligence analysis for the New York City Police Department. “It’s an area where comparative law can be of more than intellectual interest and generate real-world insights. More than a decade after 9/11 we are still finding our way in calibrating the relationship between rights and security, and thinking about the role of our various institutions, including courts, in managing national security. Israel has an extensive track record in those areas, and it’s very illuminating to think outside our framework.”

Beinisch knows the national security jurisprudence of Israel better than almost anyone, having spent 28 years in the Israeli Ministry of Justice and eventually rising to the top position of State Attorney before joining the Supreme Court in 1995. Her tenure on the court was characterized by a firm commitment to balancing civil liberties against national security.

“Israel has had more opportunities to deal with matters of national security, unfortunately, than any other state I know,” says Beinisch. “Our court was always ready to be involved in adjudicating national security issues.” That said, she added, “Every system has to confront and accept how far judicial review of national security decisions of the executive branch must go.”

The syllabus for the class encompasses substantive issues like targeted killing and intelligence oversight, more structural issues like managing national security secrets in a transparent judicial system and adjudicating wartime disputes in real time, and conceptual matters such as the influence of international law on domestic courts. Each session includes discussion of a U.S. case, an Israeli case, and a case from the judiciary of another nation, such as the U.K., Canada, Germany, or Japan.

“Professor Rascoff is a great teacher,” says Alyson Zureick ’14. “He’s really good at framing the issues and drawing linkages between materials. With Justice Beinisch, it’s incredible to read a decision that she contributed to or wrote herself and then be able to sit down with her and have her tell us, ‘Well, these are the things that we were thinking about, these were the factors that were motivating us, this is how we see our role on the court within this larger political structure.’ It highlights how difficult these decisions can be and what a challenging position courts all over the world are in making judgments around these very sensitive issues.”