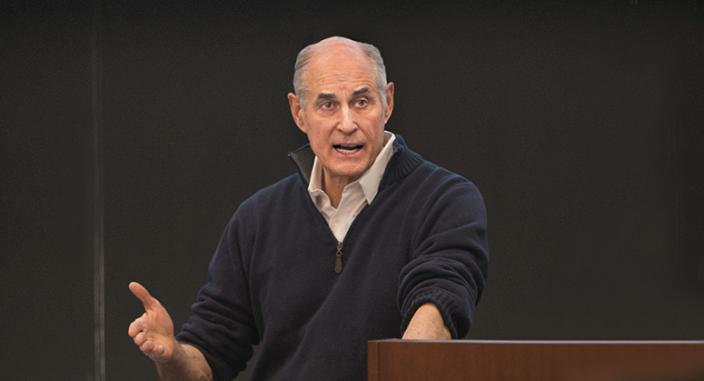 One Friday afternoon, ACLU Senior Staff Attorney Stephen Pevar, adjunct professor at NYU Law, faced a dilemma: His work on behalf of the Standing Rock Sioux Tribe’s efforts to stop the building of the Dakota Access Pipeline required him to participate in a conference call that occurred at the same time his course, American Indian Law, met. His solution was to give his students a firsthand look at the law in action, inviting them to listen in on the call as 40 lawyers across the United States discussed litigation strategy. Students were thrilled to hear this behind-the-scenes conversation, made possible by Pevar’s extensive work in the field. The author of The Rights of Indians and Tribes, Pevar has served as an attorney at the ACLU for more than three decades. In that time, he has litigated more than 200 federal cases—many of which concerned American Indian law—including one before the US Supreme Court.

In addition to taking on issues that are currently making headlines, Pevar’s course covers many areas of law, including environmental, civil rights, criminal, and tax. To fully comprehend American Indian law, Pevar says, it is important to recognize how it intersects with all of these different disciplines. He further explains that on reservations, there are divergent laws determining how taxation works, how land can be used or sold, and even how to determine jurisdiction for criminal prosecutions. “There are particular rules that apply in Indian country that apply nowhere else,” he says. Cases pertaining to this area of law also frequently come before the US Supreme Court, making American Indian law an important topic for aspiring clerks to understand, Pevar says.

Because this elective seminar covers such a wide range of legal issues, Pevar’s students approach the material with an equally diverse set of interests. Alexander Walker ’17, took the course in part due to the recommendation of one of his peers on the Environmental Law Journal, where he serves as managing editor. In addition to his interest in the environmental law issues raised during the course—which include how projects like the Dakota Access Pipeline environmentally impact Native American land and resources—Walker hoped to gain background that will be helpful for his post-graduation position as an associate at Pillsbury Winthrop Shaw Pittman.

While working there as a summer associate, Walker completed projects related to American Indian law—a specialization that the firm particularly values, Walker says, as it has represented several tribal clients and often works with the Department of Interior and the Bureau of Indian Affairs. “I’m going to be working in my firm’s real estate department, so I’m especially interested in how American Indian law can be used for real estate projects and development,” says Walker. “For example, if the federal government accepts land into trust for a tribe, then it’s no longer subject to several different state laws or taxes.”

For Ray Fadel ’17, his interest in American Indian law stems from his own Native American heritage—an interest that he first developed as a law student. “Before law school, I actually had little interest in learning Indian law, despite my ancestry,” Fadel says. Over the course of his law school experience, however, he began to raise issues of American Indian law during class discussions, as well as more broadly in relation to the University’s diversity efforts.

In one course, Fadel wrote a paper that was inspired by his personal experience with US regulations surrounding affirmative action. Eligibility is often determined by membership of federally recognized tribes, Fadel notes, which does not include tribes that crossed the Canadian-American border before the official border was established. “The two countries turned such tribes into separate legal entities whose membership does not overlap. So, even if you’re born in the United States, you can only be recognized as an Indian in Canada, which is my situation, because my tribe was split that way.” Fadel sought out Pevar’s expertise while working on his research, and his paper, which addresses these issues and proposes solutions, will be published in the NYU Law Review in October 2017.

“Professor Pevar is a remarkable person to have at the Law School,” says Fadel. “He really cares about his students and has a great deal of insight. And because of his perspective as a litigator, we get to see how this area of law is addressed in the real world.” Walker agrees, adding, “It’s very cool to get the direct, practical perspective at the same time as we’re learning all about the history and precedent in this area of law.”

For his part, Pevar says that he is thrilled to be able to introduce a new generation of lawyers to the area of law that has formed his life’s work. “It’s a labor of love for me,” he says. “I’m delighted that there are students who are interested in learning about this, and over time, I hope more and more students take these courses and help the United States fulfill the promises we’ve made to Indian tribes.”