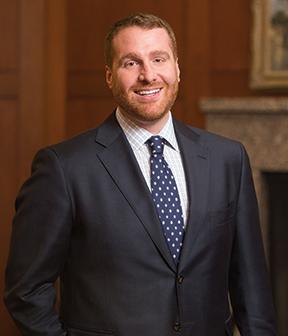 After announcing a record-breaking $450 million goal for NYU Law’s Lead the Way campaign, Assistant Dean for Development & Alumni Relations Nick Vagelatos sat down to discuss how the Law School community has responded before and after the endeavor’s public launch.

The campaign kickoff in October was a big success. How have you seen momentum building?

When we launched at the American Museum of Natural History, our position was already a testament to the incredible support of our community of alumni and friends in the silent phase of the campaign. Several key members of our community were instrumental in preparing us for the public launch through their leadership, and so many of our core supporters stepped up in an unprecedented way. During the silent phase, we received the biggest gifts in the history of the Law School, and that really built energy. When it came time to launch publicly on October 16, we were delighted to share that not only were we pursuing a record-breaking $450 million number, but that we were already $253 million toward our goal.

Previous campaigns focused on guaranteeing we have the best faculty in legal education, expanding our global footprint, and developing the physical plant of the school. Dean Trevor Morrison, who began his deanship in 2013, wanted to engage in comprehensive strategic planning to determine the priorities we would tackle during his tenure. Through that process, we identified some key strategic goals that became pillars of the plan and ultimately of the campaign: diversity and inclusion, leadership and innovation, and student success.

Having our community so involved in setting these goals makes the financial support feel like a natural extension of that engagement. The day after the launch, we received a significant gift from Wachtell, Lipton, Rosen & Katz for the most pressing needs of the Law School, which gives us the flexibility to pursue our key financial aid goals for our students. It has been exciting to have momentum coming out of the campaign launch with some key gifts this first quarter.

What of the strategic plan goals are resonating with the Law School community?

A lot of our alumni are clearly excited that NYU Law continues to be a thought leader, identifying changes ahead of other law schools in terms of leadership and innovation as well as diversity and inclusion. The theme that resonated the most was student success—particularly issues of affordability. That’s something I know Trevor takes seriously when we’re looking at the current state of legal education. It’s always particularly meaningful when I am meeting with our graduates who share what it meant to them to receive an NYU Law education and how it has paved their careers, and even more so when they share that they couldn’t have done it without some financial aid. We really wanted to emphasize the impact of this charitable giving circle, which was exemplified at the launch event by Chairman of the Board of Trustees Anthony Welters ’77, who was honored for and spoke about the Law School’s AnBryce Scholarship Program. At the launch, Trevor asked everyone who had received or provided financial aid to stand up. Almost everyone in the room was standing—it was a poignant moment.

We’ve seen positive response across the board, because we have a community that understands we must always be working to guarantee a return on the investment of our students, both for them and those they counsel in the future. And among other things, that means ensuring the future of legal education by keeping it ahead of the curve in a changing world. We’ve always done that; there’s a track record here: Our Mitchell Jacobson Leadership Program in Law and Business was one of the first of its kind and was a result of our last campaign. And we’ve been one of the first to have a global footprint. Our planning reflects the current state of the world and what we need our future leaders to be, to do for others and to do for themselves.

You mention that NYU Law has long been known for having a global focus, which has continued to evolve as there are increasing global implications for many areas of the law. How has the support of our community reflected that focus?

Nearly everything is global today in this institution, as so many areas of law intersect with laws—or their absence—outside our borders. NYU Law anticipated the changing landscape, preparing our students to work strategically and partner with key audiences across the world. We heard from interested students and from law firms that need lawyers equipped to hit the ground in Shanghai, for example, and we have our study abroad sites in Shanghai and Buenos Aires and Paris. As we built up to the launch of the campaign, we received significant support from Law School Trustee Dr. Rita Hauser and Gus Hauser, both graduates of the Law School, to build on the long success of the Hauser Global Law School Program, which integrates non-US and transnational legal perspectives across our curriculum, promotes scholarship on comparative and global law, and brings the world’s great minds to conduct research and study side by side with their American counterparts.

This past year, we also received significant support from the government of Japan to enrich the work of our US-Asia Law Institute and our faculty who are thought leaders in this space. Jerry Cohen is a well-known and well-loved figure in the area of comparative jurisprudence. His work in Asia in particular has really changed the way governments there think, and our students benefit greatly from working with him. To have the government of Japan recognize that and create an endowment here through their $5 million gift is incredible.

The Law School has also put significant emphasis on how technology is changing the profession and the world. Has the campaign surfaced significant partners in that effort?

Technology is changing the profession both because it introduces a number of novel legal questions and because it’s changing what the work of lawyers will be. One of our campaign co-chairs, John Desmarais ’88, a Law School trustee and founder of a leading intellectual property law firm, set up the Desmarais Law and Technology scholarship. We want students with those interests to have the ability to come here and pursue any of a variety of successful careers in law and technology. Whether it’s changing policy, working in law and cybersecurity, or studying IP issues, members of our community work with us to recognize emerging fields. We want to guarantee that we are producing lawyers ready to take on these challenges. And we have students who come here because they know NYU Law is the place where they can do this.

NYU Law has taken the position that the successful future of the legal profession depends on its being more inclusive and equitable, and on its playing a role in ensuring a more equitable society. Are you seeing people take up that effort?

As part of the strategic plan, the Law School launched two significant centers: the Center for Diversity, Inclusion, and Belonging and the Center on Race, Inequality, and the Law, and we’re having a variety of conversations with donors supporting those centers. The Law School has also developed a program that works to advance women’s leadership at NYU Law and in the legal profession, including legal academia, identifying obstacles to women’s advancement and addressing them.

Sheila Birnbaum ’65, a Law School Trustee—and a graduate in a time when not many law schools were admitting women—has recognized many of the issues women in the profession face as students, in Big Law, and elsewhere. She has a vision for a network that would work to make real changes, and has provided a significant gift to move it forward. The Birnbaum Women's Leadership Network is named in honor of her engagement. Law School Trustee Sara Moss ’74, who has also provided significant support, has established the Moss Women’s Leadership Training Program within the BWLN.

The Law School prides itself on the kind of thought leadership that extends beyond academia to effect real change in the world. How does the support of our community make that possible?

It’s really great to have alumni and friends, not only on our board of trustees but in our alumni associations, who partner with our centers and institutes to tackle the challenges of a changing legal landscape. We have the capacity to keep up with the most significant issues of the time—which have a clear relationship with the law—because of that support and through the leadership of our faculty and their partnership with our students. Bloomberg Philanthropies recently provided the resources to establish our State Energy & Environmental Impact Center, which supports state attorneys general in defending and promoting clean energy, climate, and environmental laws and policies.

We also received an important gift from Jay and Linda Grunin ’67 and their foundation, which made it possible for the Law School to establish the Grunin Center for Law and Social Entrepreneurship, a trailblazer in the innovative area of social enterprise.

And our community is really excited about and encouraging the efforts of our faculty in dealing with timely, real-world issues—a great recent example being the work of Alina Das ’05 through the NYU Immigrant Defense Initiative.

So where is support needed the most?

We want to guarantee that our graduates going into public service and pursuing meaningful careers in the public interest know their loans will be paid when they graduate because of our Loan Repayment Assistance Program (LRAP). We want to make sure that we’re recruiting the best and the brightest by offering competitive financial aid packages. We want to make sure that we’re lessening the burden of tuition. We so appreciate the flexibility of unrestricted support, as it allows the Law School to identify and resolve some of its most pressing needs. While we’ve been lucky this past fiscal year and through the launch of our campaign to receive significant large gifts, the greatest number of contributions are small gifts of anywhere from $50-$250. And those make a significant difference when they’re supporting our Annual Fund, which provides Dean’s Merit Scholarships, covers parts of our LRAP, and gives the Dean the flexibility to do what we need to do to recruit the best students for the best education and the best opportunities.

What appeals to our donors and our community the most is that they have the capacity to make a difference in the world with their support. And many of them recognize the importance of the financial aid they received here five, 10, 15, or 50 years ago; they’re grateful for their NYU Law education and what it has done for their careers and for their success, and when they want to give back they want to make sure that they give back with an impact.