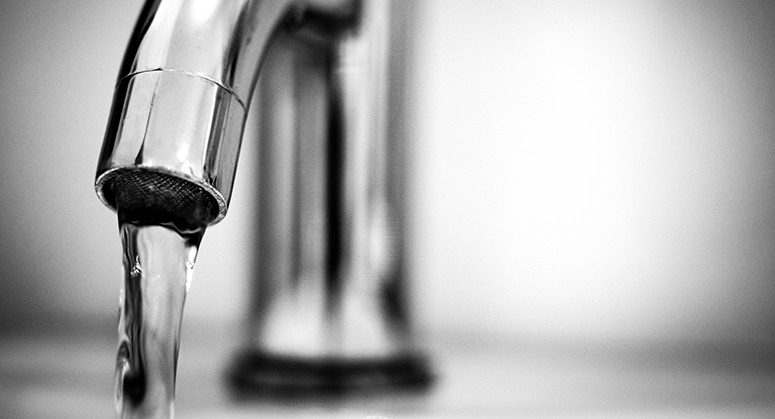 Per- and polyfluoroalkyl substances (PFAS) are bioaccumulative and environmentally persistent, have been widely used in commercial applications since the 1950s and have been linked to a series of human health harms, including cancer, kidney disease and birth and developmental disorders. The chemicals have been detected in the drinking water of more than six million Americans at a level exceeding the Environmental Protection Agency’s (EPA) 2016 lifetime drinking water health advisories level of 70 parts per trillion (ppt) — a level seven to ten times greater than the safe level of exposure estimated by the Centers for Disease Control and Prevention (CDC) in 2018.

The widespread public exposure to dangerous levels of PFAS chemicals in drinking water and other potential pathways has triggered significant concern in Congress. During the 116th Congress (2019-2021), Congress used the annual processes around the Department of Defense’s authorization bill (the National Defense Authorization Act or “NDAA”) and government-wide appropriations bills to adopt PFAS-related programs and provisions. More information about PFAS provisions included in NDAAs and appropriations bills in the 116th Congress and stand-alone PFAS-related legislation that was introduced in the 116th Congress can be found here.

The list of proposed stand-along PFAS legislation divides into five key buckets. These buckets include: (1) enhanced detection and research; (2) new regulatory mandates; (3) cleanup assistance; (4) exposure to PFAS contamination at or near military installations; and (5) creation of a tort action. 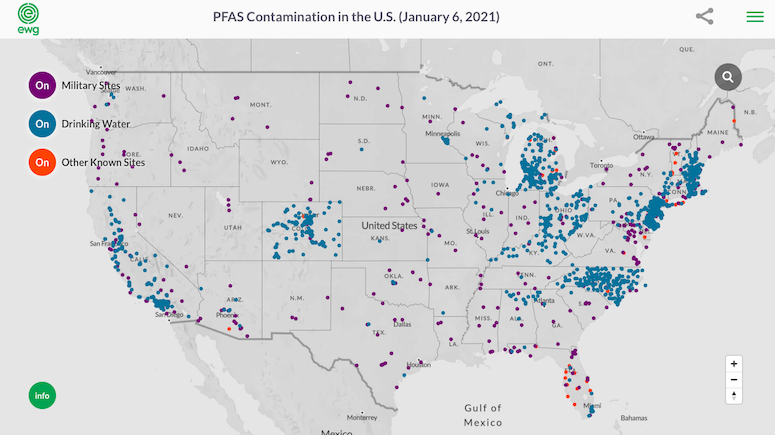 The Environmental Justice Mapping and Data Collection Act (H.R. 516, S. 101) would help identify and connect environmental justice communities with policy outcomes. The legislation, among many provisions, would establish an Environmental Justice Mapping Committee, which would be tasked with establishing an interactive, transparent, integrated, and federal government-wide tool for assessing and mapping environmental justice communities based on the cumulative impacts of all indicators selected by the Committee to be integrated into the tool. The tool would be required to integrate multiple data layers of indicators, including pollution burdens, such as burdens created by PFAS chemicals.

The PFAS Action Act (H.R. 2467) is omnibus PFAS chemical legislation that was passed by the full House in the 116th Congress. The PFAS Action Act would require the EPA to designate perfluorooctanic acid (PFOA) and perfluorooctane sulfonate (PFOS) chemicals, two of the most common PFAS chemicals, as “hazardous substances” under the Superfund law within one year of enactment of the legislation. Within five years of enactment of the legislation, the agency would have to determine whether to designate all other PFAS chemicals as hazardous substances and post on its website its determination within 60 days of its final decision.

Superfund imposes liability on responsible parties for response costs incurred in the cleanup of sites contaminated with hazardous substances. Designating PFOA and PFOS and other PFAS chemicals as hazardous substances would likely trigger cleanups of contaminated groundwater under the Superfund law. Five years after the enactment of the legislation, the EPA would be required to submit to the House Energy and Commerce Committee and the Senate Environment and Public Works Committee a report reviewing the actions taken by the agency to cleanup PFOS and PFOA chemicals designated as hazardous substances under the Superfund legislation.

The PFAS Action Act would also require the EPA, for each measurable PFAS chemical for which it decides to list as a toxic pollutant under the Clean Water Act, to initiate a process for adding the chemical to the list. The agency would also be required to establish effluent limitations and pretreatment standards for each measurable PFAS chemical, if the EPA has decided to establish such effluent limitations and pretreatment standards. The EPA would also have to publish human health water quality criteria standards for measurable PFAS chemicals that do not currently have criteria standards. The legislation would establish a $200 million grant program to provide grants in amounts not to exceed $100,000 to owners and operators of publicly owned sewer treatment works to be used for the implementation of pretreatment standards.

EPA would be required within a year of enactment of the legislation to revise the Safer Choice Standard of the Safer Choice Program to include that any pot, pan, cooking utensil, carpets, rugs, clothing, upholstered furniture, stain resistant, water resistant, or grease resistant coating that are not subject to section 409 of the Federal Food, Drug, and Cosmetic Act not contain any PFAS chemicals in order to receive a Safer Choice label. The Safer Choice label assists consumers in identifying products with safer chemical ingredients.

The bill also includes a provision intended to address the risks, particularly health risks, of using firefighting foam containing PFAS chemicals. The PFAS Action Act would require the EPA to issue guidance for firefighters and other first responders to minimize the use of foam and other firefighting materials containing PFAS in order to minimize health risks from PFAS exposure. Under this provision, the agency in consultation with the U.S. Fire Administration must submit a report to Congress, with recommendations for congressional action, on the effectiveness of the guidance issued by the agency to minimize firefighters’ and other first responders’ health risks from PFAS exposure. The EPA would be required in consultation with the U.S. Fire Administration to report to Congress on the efforts of the agency and other relevant federal departments to identify viable alternatives to the use of firefighting foam and related equipment containing PFAS chemicals.

The PFAS Action Act would amend the SDWA by authorizing until 2026 a $100 million plus annual grant program for community water systems affected by the presence of PFAS chemicals. Communities included in this program would include communities affected by contamination by GenX, a type of PFAS chemical, and communities in which climate change, pollution, or environmental destruction have exacerbated systemic racial, regional, social, environmental and economic injustices. The grants would help pay for capital costs associated with the implementation of eligible treatment technologies, where current technology is not sufficient to remove all detectable amounts of PFAS chemicals in the community water system.

The PFAS Action Act would also require the EPA to investigate methods and means to prevent contamination of surface waters, including drinking water, by GenX. The EPA would also have to develop a risk communication strategy to inform the public about the hazards or potential hazards of PFAS chemicals by disseminating information about the risks or potential risks of such substances in land, air, water and products; and notifying the public about exposure pathways and mitigation measures through outreach and education resources. Lastly, U.S. territories would be eligible to receive SDWA funding for the purpose of addressing emerging contaminants with a focus on PFAS chemicals.

The legislation would also amend the Toxic Substances Control Act (TSCA) by instructing the EPA, for a period of five years, to determine that any PFAS chemical, for which a notice of intent to manufacture or process has been submitted to the EPA, presents an unreasonable risk of injury to health or the environment. The EPA would then be required to issue an order that prohibits the manufacture, processing and distribution in commerce of such PFAS chemicals. TSCA would also be amended to require the EPA to mandate by rule comprehensive toxicity testing of all PFAS chemicals and provide for the creation of categories of PFAS chemicals based on hazard characteristics.

The PFAS Action Act was introduced in the House by Rep. Debbie Dingell and has 27 bipartisan cosponsors.

The Protecting Firefighters from Adverse Substances Act (S. 231) would require the Federal Emergency Management Agency (FEMA) in consultation with other relevant agencies to develop and publish guidance for firefighters and other emergency response personnel on training, educational programs, and best practices to reduce exposure to PFAS chemicals from firefighting foam and personal protective equipment. FEMA would also be required to develop guidance on limiting or preventing the release of PFAS chemicals from firefighting foam into the environment and on alternative foams and personal protective equipment that do not contain PFAS chemicals. FEMA is also to review, and if appropriate, update the guidance three years after the release of the original guidance and every two years after.

The bill, which was introduced in the Senate by Sen. Gary Peters, has eight bipartisan cosponsors. On March 17, 2021, the bill was passed out of the Homeland Security and Government Affairs Committee.

The Water Affordability, Transparency, Equity, and Reliability Act (S. 916, H.R. 1352) (WATER Act) would create or amend several drinking water programs. Among many different provisions, the bill would establish a WATER trust fund in the U.S. Treasury and authorize nearly $35 billion in annual appropriations for the fund. A certain percentage of appropriated funds would be dedicated to the Safe Drinking Water Act’s state revolving loan fund program. The state revolving loan fund program would then be allowed to provide assistance to a “publicly owned, operated, and managed community water system for the purpose of updating a treatment plant or switching [its] water sources” due to PFAS contamination.

The bill, introduced by Reps. Brenda Lawrence and Ro Khanna in the House and Sens. Bernard Sanders in the Senate, has 81 House cosponsors and three Senate cosponsors.

The Climate Leadership and Environmental Action for our Nation’s (CLEAN) Future Act (H.R. 1512) is omnibus climate legislation. The CLEAN Future Act includes as a provision the Providing Financial Assistance for Safe Drinking Water Act from the 116th Congress. This provision would amend the SDWA by establishing a $500 million annual grant program for community water systems affected by the presence of PFAS chemicals. The grants would help pay for capital costs associated with the implementation of eligible treatment technologies, where current technology is not sufficient to remove all detectable amounts of PFAS chemicals in the community water system.

The CLEAN Future Act was introduced in the House by Rep. Frank Pallone and has 19 cosponsors.

The bill was introduced in the Senate by Sen. Jeff Merkley and has 12 cosponsors.

⚫ Response to Military Use of PFAS

The PFAS Registry Act (H.R. 2742, S. 1121) would require the Department of Veteran Affairs (VA) to establish and maintain a national database for service members and veterans who may have been exposed to PFAS chemicals. The VA would be required to periodically notify eligible individuals of significant developments in the study and treatment of health conditions associated with exposure to PFAS. Five years after enactment of the legislation and every five years thereafter, the VA — in consultation with the Department of Defense and the EPA — would be required to submit to Congress recommendations for additional chemicals to add to the registry.

The PFAS Accountability Act (H.R. 2751, S. 1334) would create a federal right of action - the ability to bring a lawsuit as an individual or as part of a class action - for individuals significantly exposed to PFAS chemicals in order to encourage PFAS research and provide accountability for irresponsible PFAS manufacturing and irresponsible use of PFAS in manufacturing. The bill would amend the Toxic Substances Control Act by providing that an individual who is significantly exposed to PFAS or has reasonable grounds to suspect significant PFAS exposure may bring a claim, as an individual or on behalf of a class, in any federal district court for appropriate legal and equitable relief against any PFAS manufacturer. The claim can be brought against any person engaged in any portion of a manufacturing process that created the PFAS to which the individual was significantly exposed and foresaw or reasonably should have foreseen that the creation or use of PFAS would result in human exposure to PFAS. The court could award medical monitoring to an individual or class of individuals that bring a claim under this provision, if as a result of PFAS exposure the individual or class suffers an increased risk of developing a disease associated with PFAS exposure and as a result the individual or class has a reasonable basis for undergoing effective periodic diagnostic medical examinations of a nature or frequency that is different from or additional to what would be prescribed in the absence of exposure.

The PFAS Accountability Act was introduced by Sen. Kirsten Gillibrand in the Senate, where it currently has two cosponsors, and Rep. Madeleine Dean in the House, where it has nine cosponsors.