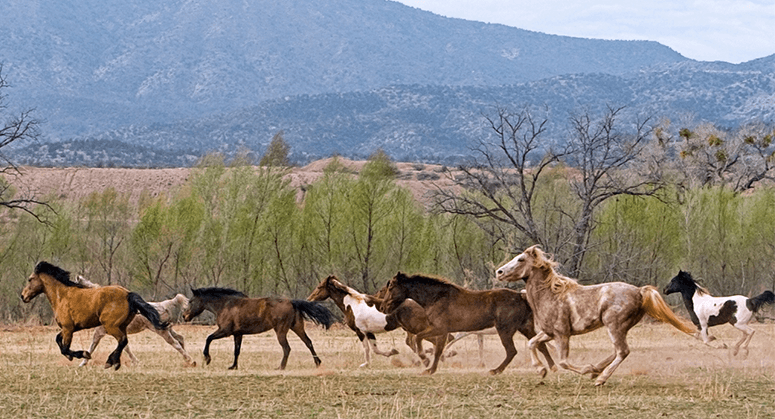 Wild horses that roam public lands in California are occasionally rounded up as part of wildlife and land management practices. In October 2018, the United States Forest Service began a roundup of wild horses in California and announced a new policy that it might put some of the collected horses up for unconditional sale after 90 days, in potential violation of California law.

The Forest Service, in the first phase of the auction of the wild horses, will prioritize the adoption of wild horses by members of the public in compliance with California law that prohibits the possession or sale of horses with the intent of using them for human consumption. However, in the second auction phase, after January 10, 2019, the Forest Service will not condition the sale of the collected wild horses on compliance with the conditions imposed by California law.

In November 2018, California Attorney General Xavier Becerra sent a letter to the Secretary of Agriculture Sonny Perdue, who oversees the Forest Service, objecting to this policy change. The letter noted the unconditional sale of the wild horses in the second phase may violate California law, and is inconsistent with restrictions that Congress has imposed on the Department of Interior stating that wild horses cannot be sold for processing into commercial products. Attorney General Becerra urged that buyers in both phases of the auction process be required to declare their compliance with the requirements imposed by California law.

As of May 2019, the Forest Service had at least temporarily suspended its proposal to sell — without conditions — wild horses rounded up in California. The suspension was in response to a lawsuit challenging the Forest Service’s plan. In March 2020, advocacy groups dropped their lawsuit against the Forest Service after Congress included provisions in its Interior-EPA funding bill for fiscal year 2020 that prohibited the agency from selling horses removed from California’s Modoc National Forest without limitations preventing their possible slaughter.