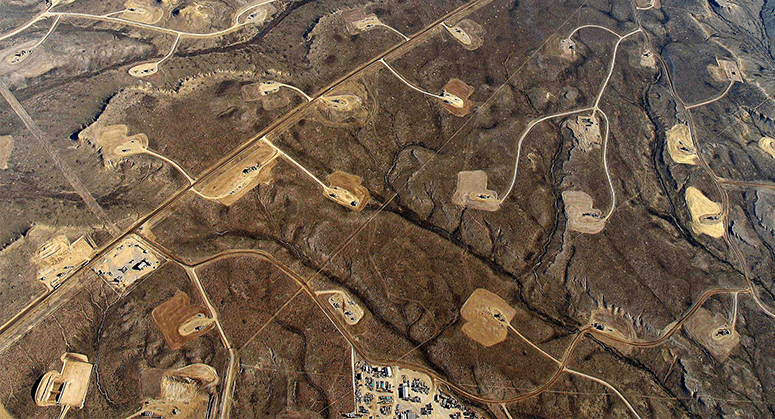 Hydraulic fracturing, or fracking, is a method for producing oil and gas in which oil, water, sand and chemicals are injected at high pressure into tight rock formations to pump out oil and gas. Fracking activities can have a variety of adverse environmental impacts associated with the use of fracking chemicals, the use and disposal of large quantities of water (including potential triggering of earthquakes from deepwater water injection practices), the surface disposal of contaminated development water, and the like. As the oil and gas industry’s use of fracking has dramatically increased over the last decade plus, state attorneys general have insisted that fracking safety regulations be updated to reflect modern use of the practice and that environmental reviews of potential fracking projects fully account for fracking’s environmental impacts.

In 2015, the Bureau of Land Management (BLM) finalized new requirements governing fracking activities on public lands, updating woefully out-of-date rules from the 1980s that did not reflect modern development technologies. The final rule called on BLM to inspect and validate the safety of fracking wells, required oil and gas producers to disclose chemicals used in the fracking process, and established standards for storing fluids before their approved disposal by BLM.

In July 2017, BLM proposed a rule to rescind the 2015 fracking rule. Six months later, in December 2017, BLM finalized a rule to permanently rescind the 2015 BLM fracking rule and replace it with the regulatory text that existed prior to 2015. In January 2018, California Attorney General Xavier Becerra filed suit against BLM in a federal district court in California for unlawfully rescinding the fracking rule. The suit seeks an order compelling BLM to reinstate the 2015 fracking rule because the rule lacks a reasoned analysis and ignores BLM's statutory mandates and the significant environmental consequences of rescinding the rule in violation of the Administrative Procedure Act (APA), the National Environmental Policy Act (NEPA), and federal land management statutes.

In July 2018, the federal district court in California sided with California Attorney General Becerra in rejecting BLM’s request to move the suit to the District of Wyoming. In June 2019, California Attorney General Becerra filed a motion for summary judgment in the lawsuit challenging the rescission of the 2015 BLM fracking rule. The motion requests that the federal district court vacate the repeal of the 2015 fracking rule.

The motion asserts that BLM violated the APA in repealing the fracking rule. The rule did not contain a reasoned analysis of repealing the rule in violation of the APA as the Bureau failed to explain how preexisting federal and state regulations would ensure environmentally responsible development of federal oil and gas resources. Additionally, BLM did not consider the full benefits of the 2015 rule or explain how the cost savings associated with repealing the fracking rule exceeded the benefits of the 2015 rule. BLM also violated NEPA in failing to analyze the environmental impacts of repealing the 2015 rule before issuing the rescission rule. BLM’s 2015 rule found that failing to implement the rule would result in many environmental impacts, which should have necessitated BLM conducting an environmental impact statement (EIS) for the rescission. But the Bureau declined to conduct an EIS for the 2017 rule, claiming that any impacts would be insignificant.

In March 2020, the federal district court in California upheld BLM’s rescission of the 2015 rule. The court held that, while BLM could have provided more detail in explaining its rationale for the 2017 rollback, the Bureau’s decision-making process cleared the bar of providing a reasoned analysis under the APA in prioritizing cost reduction over benefits gained in conducting its cost-benefit analysis of jettisoning the 2015 rule. As to the NEPA claim, the court found NEPA did not apply as the environmental status quo was not altered by the 2017 repeal because the 2015 rule had not yet gone into effect. In June 2020, California Attorney General Becerra appealed the March 2020 decision to the Ninth Circuit.

In October 2020, California Attorney General Becerra filed the state’s opening brief in the Ninth Circuit litigation appealing the California federal district court’s March 2020 decision. The brief noted that the BLM’s 2017 repeal rule violated the APA because the Bureau failed to provide a reasonable explanation for the repeal. In particular, BLM did not justify its finding that federal, state and tribal regulations are duplicative of the 2015 rule as the relevant federal, state and tribal requirements fall short of the 2015 rule’s standards. Additionally, BLM could not provide an explanation for its conclusion that the cost savings of the 2017 repeal exceed the benefits of the 2015 rule as the estimated cost savings are less than the estimated cost of the 2015 rule and the repeal does not make up for the foregone benefits of the 2015 rule.

Further, Attorney General Becerra pointed out that the district court decision should be reversed as BLM failed to consider obvious alternatives to a complete repeal of the 2015 rule, despite a recent Supreme Court of the United States ruling reaffirming that a reasoned analysis of a repeal rule must include analysis of significant policy alternatives. Lastly, the brief asserted that the district court misapplied Ninth Circuit precedent in its NEPA analysis as the repeal rule triggered NEPA analysis by alternating the status quo in eliminating the 2015 rule’s protective requirements.

In December 2020, BLM filed an answering brief, arguing that California and the Sierra Club failed to establish standing, that it adequately explained its decision to rescind the 2015 rule, that plaintiffs’ arguments are insufficient, and that the rescission rule is not subject to NEPA. As of June 2021, the appeal remains temporarily closed.

In April 2019, BLM released a draft supplemental environmental impact statement (EIS) on BLM’s plan to open up over 1 million acres of federal lands to fracking and other extraction activities in central California. In June 2019, California Attorney General Becerra filed comments on the draft supplemental EIS, highlighting deficiencies with the document and urging it be withdrawn in favor of a revised and expanded draft EIS. The comments noted that on the basis of BLM’s incorrect assumption that at most four wells would be hydraulically fractured each year, the Bureau mistakenly concluded that no significant impacts would result to air quality, water resources and biological resources. Attorney General Becerra also pointed out that the draft supplemental EIS failed to consider how the plan to increase drilling on federal lands conflicts with California’s economy-wide greenhouse gas emission reduction targets.

In January 2020, California Attorney General Becerra filed a lawsuit in federal district court in California challenging the BLM’s FEIS and the record of decision. The suit notes that the FEIS violated NEPA and the APA as it failed to take the required “hard look” at many of the significant environmental impacts associated with fracking and to provide sufficient evidence to support its conclusions. Specifically, the BLM relied on the faulty assumption that at most four wells would be fracked each year and reached the incorrect conclusion that there would be no significant impacts on air quality, water resources and biological resources. Attorney General Becerra is seeking to have the FEIS and record of decision set aside and to have the court enjoin the bureau from relying on the FEIS and record of decision to proceed with any fracking-related activities in the more than 1 million acres of federal land in central California.

In August 2020, BLM released a draft Environmental Assessment (EA) and Finding of No Significant Impact (FONSI) evaluating the impacts of selling seven oil and gas leases totaling more than 4,000 acres in Kern County. BLM avoided a detailed environmental analysis of the seven leases by relying on the flawed programmatic environmental review finalized in December 2019 that opened more than one million acres of public lands in Central California to oil and gas drilling.

In September 2020, California Attorney General Becerra and the California Air Resources Board (CARB) submitted comments criticizing BLM’s plan. In their comments, Attorney General Becerra and CARB noted that the draft EA and FONSI must be revised because it significantly underestimated the percent of new wells that would be drilled using fracking, ignored recent studies and the best available science in evaluating the impacts of fracking and did not consider or attempt to mitigate the impacts of oil and gas development on nearby environmental justice communities. The letter also pointed out that the draft EA and FONSI failed to analyze its proposed action for consistency with California state standards and policies, including California’s statutory targets for reducing greenhouse gas emissions, failed to adequately analyze impacts to groundwater, and failed to adequately consider or mitigate the significant climate impacts of opening up these public lands to new oil and gas leasing. Attorney General Becerra and CARB strongly urged BLM to withdraw the draft EA and FONSI and prepare a new analysis that adequately addresses these deficiencies.

In November 2020, California Attorney General Becerra, Governor Gavin Newsom, CARB, and the California Department of Fish and Wildlife (CDFW) filed a protest challenging BLM’s proposed lease sale. In the protest, the coalition emphasized—as they did in their September comment letter—that BLM’s draft EA is deficient and must be revised because it fails to fully analyze the significant effects of oil and gas leasing and relies on the flawed programmatic environmental review.