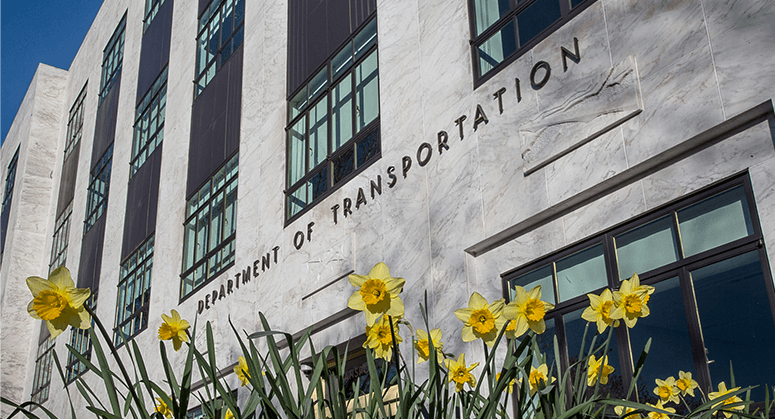 In 2017, California signed an agreement with the Canadian province of Quebec to continue communicating with each other regarding possible changes to their respective greenhouse gas emissions reduction programs that the two jurisdictions had linked through locally-adopted regulations. The linked programs allow regulated companies in both jurisdictions to find economically efficient ways to comply with both jurisdictions’ regulatory programs for reducing greenhouse gas emissions.

In October 2019, the Trump administration sued California in federal district court in California to invalidate the 2017 agreement between California and Quebec. The administration alleged that California’s agreement with Quebec violated foreign affairs-related provisions of the Constitution, including the Treaty Clause, (prohibition on states signing treaties with foreign governments), Compact Clause (prohibition on states entering into compacts with a foreign power) and the Foreign Affairs Doctrine (president has foreign affairs authority).

In January 2020, California Attorney General Xavier Becerra filed a motion in opposition to the administration’s December 2019 motion for summary judgment and a cross motion for summary judgment in favor of the state. The brief noted that the 2017 agreement between the jurisdictions to coordinate regarding locally-adopted and applicable greenhouse gas emissions reduction regulatory programs does not violate the Treaty Clause or the Compact Clause because the agreement does not implicate the weighty matters of national concern that the clauses are designed to protect. Further, neither the 2017 agreement nor the locally adopted linkage regulations encroach upon the federal government’s foreign affairs authority; and there is no evidence supporting the claim that the agreement or regulations has had any impact on the federal government.

The following month, February 2020, Oregon Attorney General Ellen Rosenblum led fourteen attorneys general in filing an amicus brief in support of denying the administration’s motion for summary judgment and granting California’s cross-motion for summary judgment. The brief noted that the 2017 agreement merely provides a framework for California and Quebec to communicate about the coordination of both jurisdictions’ greenhouse gas emissions reduction regulations and does not require congressional consent under the Compact Clause. Further, the 2017 agreement is not a political alliance prohibited by the Treaty Clause as formalizing the communication and coordinating process to manage local environmental harms is an objective that falls within states’ traditional regulatory realm.

In March 2020, the federal district court in California granted California’s cross motion for summary judgement. The court ruled in favor of the state as it found that the state’s 2017 agreement with Quebec does not represent a “treaty” within Article I of the Constitution and does not rise to the level of a “compact” under the Compact Clause of the Constitution.

Later in May 2020, a coalition of 14 attorneys general led by Oregon Attorney General Rosenblum filed an amicus brief in support of denying the administration’s motion for summary judgment and granting California’s cross-motion for summary judgment. The brief noted that addressing climate change falls within traditional state responsibilities and therefore does not intrude on the federal government’s foreign affairs power. The coalition also pointed out that the administration claimed the 2017 agreement conflicts with federal foreign policy, but failed to identify an actual policy and did not demonstrate how the 2017 agreement would interfere with the federal government’s ability to negotiate an international climate agreement.

In July 2020, the federal district court in California ruled in favor of California and the coalition of 14 attorneys general in granting California’s motion for summary judgment on the Trump administration’s sole remaining claim under the Foreign Affairs Doctrine. The court held that the 2017 agreement is neither barred by conflict preemption as the agreement did not conflict with an express federal foreign policy nor is it barred by field preemption as the agreement did not intrude on the federal government’s foreign affairs power.

In September 2020, the Trump administration filed a notice of appeal challenging the federal district court’s July 2020 order entering a final judgment in favor of California.

In 2015, the Oregon Environmental Quality Commission (OEQC) issued the state’s Low Carbon Fuel Standard (LCFS), which seeks to reduce greenhouse gas emissions from use and production of transportation fuels in Oregon to at least ten percent lower than 2010 levels by 2025. The LCFS requires fuel importers or producers to maintain an average carbon intensity of all transportation fuels sold in the state below an annual limit. The standard assigns carbon intensities to fuels by calculating lifecycle greenhouse gas emissions, including on the basis of fuel type and where the fuel is produced and refined.

Following the release of the rule by OEQC, the oil and gas and trucking industries challenged the legality of the LCFS in federal court. The plaintiffs alleged that the program unconstitutionally discriminates against out-of-state fuels by assigning petroleum and Midwest ethanol higher carbon intensities than Oregon biofuels.

Oregon Attorney General Rosenblum defended the LCFS in court, arguing that the LCFS does not unconstitutionally discriminate against out-of-state fuels as the standard distinguishes among fuels on the basis of carbon intensity. The district court sided with Attorney General Rosenblum’s reasoning and dismissed the industry-led complaint. The Ninth Circuit Court of Appeals affirmed.

Like Oregon, California also has an LCFS, which supports the use of lower-carbon alternative fuels in the state and is part of the state’s economy-wide greenhouse gas emissions reduction program. The California Air Resources Board (CARB) adopted its first LCFS regulation in 2009 and required that the average carbon intensity of transportation fuels used in California be reduced by ten percent by 2020.

In 2013, on appeal from a California federal district court decision, the Ninth Circuit in Rocky Mountain Farmers Union v. Corey rejected a challenge from industry groups that the 2009 LCFS violated the Constitution’s Commerce Clause. The court found that the 2009 standard did not unconstitutionally regulate extraterritorially because it only regulated average carbon intensity of fuels sold in California and did not unconstitutionally discriminate against out-of-state fuels.

In 2015, CARB adopted a new LCFS that was designed to reflect improved greenhouse gas lifecycle modeling and lessons from implementing the 2009 standard. Undeterred by the Ninth Circuit’s 2013 decision, industry groups again challenged the 2015 LCFS as unconstitutional on largely the same grounds as in Rocky Mountain. The district court rejected industry challenges to the 2015 standard, and on appeal to the Ninth Circuit in March 2018, California Attorney General Becerra argued that the plaintiffs’ claims were without merit because the issues raised by the litigation had already been decided in California’s favor in Rocky Mountain. In January 2019, the Ninth Circuit sided with California Attorney General Becerra in holding that the challenges to the 2015 LCFS were largely precluded by its prior decision in Rocky Mountain and dismissed the claims.

In February 2018, Massachusetts Attorney General Maura Healey testified at a hearing before the Massachusetts Department of Environmental Protection on its use of $75 million in mitigation funds that were part of the settlement that the Attorney General’s Office secured with Volkswagen for employing technology to defeat federal emission tests.

Based on the testimony it received at hearings, the Massachusetts Department of Environmental Protection released its draft plan for using the settlement funds in July 2018. The draft plan proposes funding projects that will achieve the state’s greenhouse gas emission reduction targets, reduce air pollution in the transportation sector and promote electrification of the state’s transportation network.

In December 2018, the Massachusetts Department of Environmental Protection released its final plan for using the $75 million in mitigation funds. The funding will be used to help the state achieve its greenhouse gas emission reduction targets, reduce transportation-related air pollution and promote electrification of the state’s transportation network.