Juneteenth & the Pursuit of Environmental Justice

In an ironic twist, President Trump recently brought attention to the importance of today in our nation’s history. June 19 — or Juneteenth — marks the day in 1865 when Union soldiers arrived in Galveston, Texas with news that the Civil War was over and enslaved people were free. The news was cause for celebration to be sure, although it arrived a full two and a half years after President Lincoln signed the Emancipation Proclamation. We have written in the past about how Juneteenth is emblematic of justice delayed for Black communities and how, in our Center’s corner of the world, justice continues to be delayed in ensuring clean air, clean water, and a healthy environment.

In the midst of nationwide protests about systemic racism and violence against Black people, the President selected June 19 to hold his first COVID-era political rally in Tulsa, Oklahoma of all places — the site of one of our nation’s worst race massacres in 1921 where white residents attacked and killed hundreds of Black residents in the Greenwood neighborhood, destroying the once-thriving business district. Fortunately, the President listened to his better angels and delayed the rally by a day. Unfortunately, his assault on our nation’s bedrock environmental laws and the risk of further harm to minority communities across the nation continues. 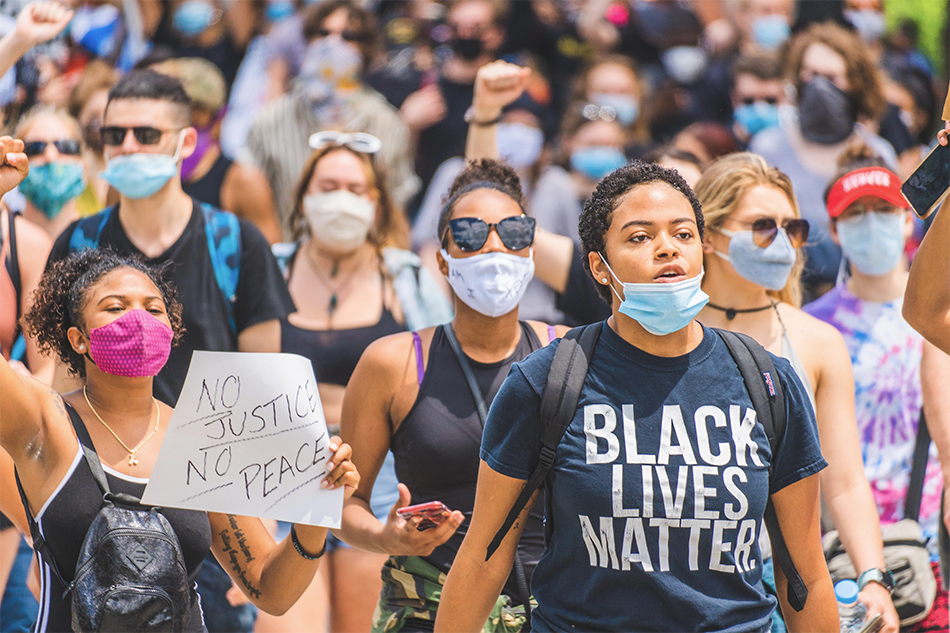 Protesters march in the spring of 2020 as part of a worldwide series of demonstrations against systemic racism.

This one scheduling choice is emblematic of the silencing of Black voices and a disregard for the lessons of history. This moment in time — as communities take to the streets in protest in the midst of a pandemic — should be the time that government officials take stock of their decision-making processes and demonstrate that they are listening.

A Seat at the Table for Environmental Justice

For those agencies tasked with considering actions that might affect the environment, mandates already exist requiring agencies to fully consider “the disproportionately high and adverse human health or environmental effects of its programs, policies, and activities on minority populations and low-income populations.” This directive comes from a 1994 Executive Order aimed at addressing and achieving environmental justice.

Although imperfect, the Environmental Justice Executive Order has survived the test of time and several changes in Administrations. When drafted, it was meant to incorporate the ideals of the Civil Rights Act of 1964, which prohibits discrimination on the basis of race, color and national origin, and the National Environmental Policy Act (“NEPA”) of 1969, which calls on federal agencies to consider the environmental impacts of their decisions and ensure that the public has a voice in the decision-making process. 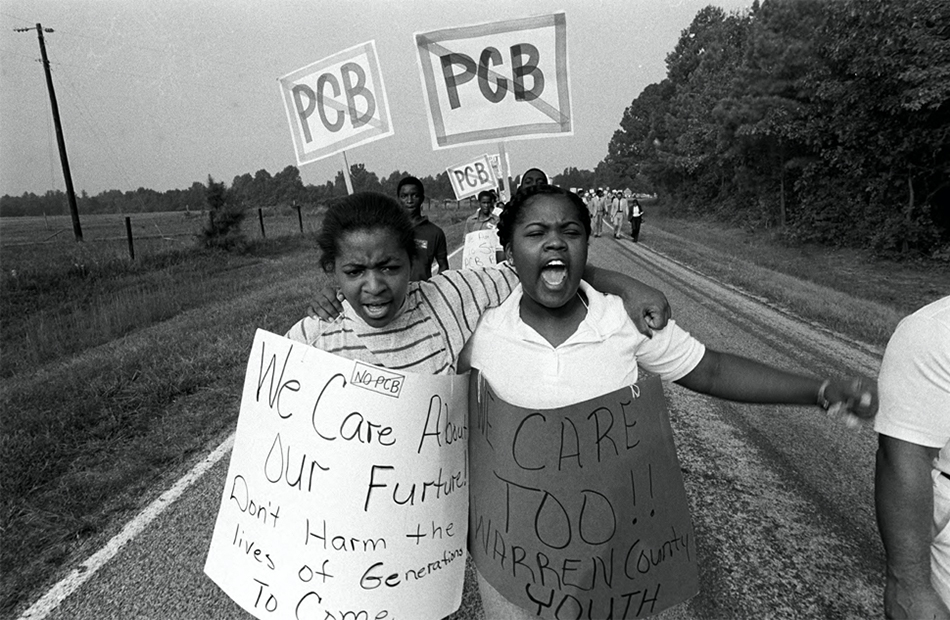 Protesters marched in 1982 in Warren County, North Carolina against a proposed PCB landfill. Although unsuccessful in preventing the landfill, the effort helped galvanize the environmental justice movement. (Jerome Friar/UNC Libraries)

NEPA and the Environmental Justice Executive Order direct federal agencies to stop before they act, listen to affected communities, and incorporate suggestions from those communities to mitigate potential harm. The Council on Environmental Quality (“CEQ”) — tasked with overseeing NEPA’s implementation — once recognized the importance of the statute in providing a seat at the table for communities affected by federal government actions.

CEQ’s Citizens Guide to NEPA acknowledges that the public often has important information about the value of the places and resources that might be affected by federal actions and that NEPA requires agencies to seek that input. Unfortunately, instead of using this moment to shore up these existing environmental justice tools, the Trump Administration is attempting to undermine or outright eliminate requirements for crucial citizen interaction in environmental decision-making.

A stark case in point is CEQ’s proposal to gut the regulations that implement NEPA. Released in January, this proposal contains a number of flaws, but chief among them is striking the consideration of cumulative effects when an agency is analyzing a proposed action’s potential impacts. From NEPA’s earliest days, CEQ has affirmed the importance of considering not just the narrow impacts of an individual action, but also how those impacts might combine with the impacts of similar or closely-located projects.

As state attorneys general noted in their comments opposing the proposal, this cumulative impact analysis is “essential to identifying whether and how low income and frontline communities of color may be overburdened by additional environmental impacts posed by an action because these communities may already be disproportionately burdened by existing sources of pollution.” This is not a new concept, and the insistence that agencies do this hard work of listening and analyzing the realities of the communities affected by government decisions has long been demanded by communities across the nation.

Hazel Johnson — known by many as the mother of environmental justice — was just such a community member on Chicago’s south side. Ms. Johnson brought attention to the high cancer and asthma rates in her community in the 1970s, a neighborhood called Altgeld Gardens that she called the “toxic doughnut” given its location surrounded by polluting industrial activities. She rightfully demanded that her neighborhood should have “input in what is being said and done within our community.” 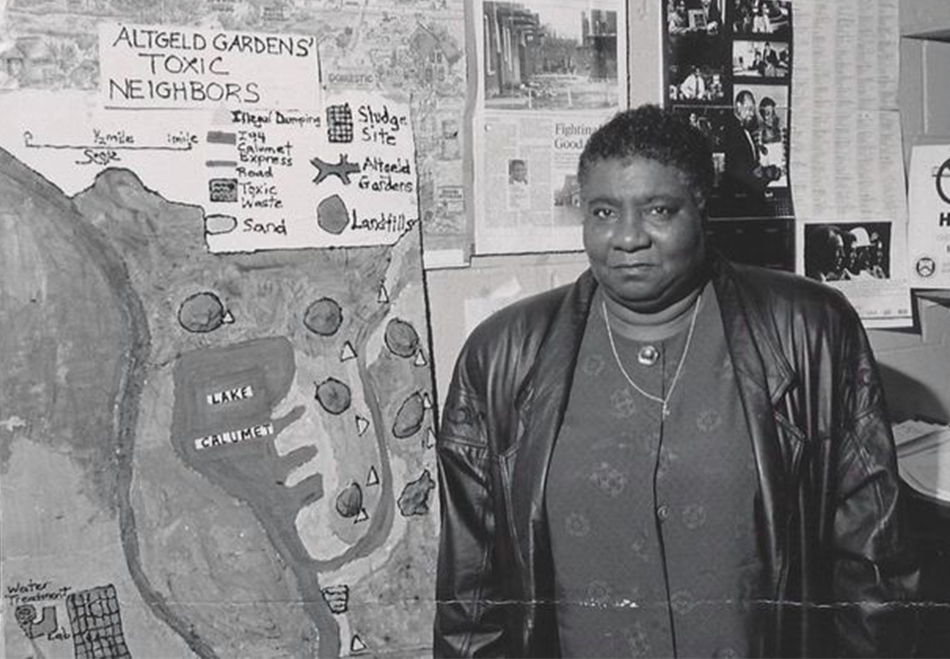 Hazel Johnson, a pioneer of environmental justice advocacy, shined a spotlight on the connection between health issues in the Altgeld Gardens community and the surrounding "toxic doughnut" of polluting facilities. (People for Community Recovery)

More recently, the Standing Rock Sioux Tribe implored the U.S. Army Corps of Engineers to consider the cumulative impacts that an oil spill from the Dakota Access Pipeline would have on the tribe’s ability to hunt, fish, and access healthy drinking water, particularly given the history of past actions that negatively impacted the natural resources around the tribe’s reservation. Without such analysis, the tribe argued — and a court agreed — that the agency may fail to fully “recognize the interrelated cultural, social, occupational, historical, or economic factors that may amplify the natural or physical environmental effects of the proposed agency action.”

The state attorneys general recognize that “NEPA is an important tool in identifying and addressing environmental injustice because it requires agencies to examine salient information and gives communities a voice in the approval process.” Indeed, in the absence of environmental justice legislation, NEPA is the primary means to compel agencies to even consider the environmental justice implications of their actions. This Administration’s suggestion to eliminate consideration of cumulative impacts fundamentally undermines the purpose of the Environmental Justice Executive Order and disrespects decades of progress on this issue.

In order to do the hard work of addressing and unraveling systemic inequality in our nation, our federal government has a moral — and legal — obligation to include disadvantaged communities in its decision-making processes, especially when the decisions at hand involve fundamental human rights like the right to breathe clean air and access clean water. Make no mistake, this is hard work, but agencies have the tools to make it happen — unfortunately they are currently missing the strong leadership required to make it a priority. Hopefully, the Administration’s better angels will prevail in this instance as well.

Elizabeth Klein is an attorney who specializes in clean energy, climate change and environmental issues. Klein is the Deputy Director of the State Energy & Environmental Impact Center, and served at the Interior Department during the Clinton and Obama administrations.