Getting to a Cleaner Grid

The wonky world of electricity markets has a real impact on a state and region’s energy mix and how quickly decarbonization can occur (plus at what cost). Many states are on a path to promote clean energy, but incumbent generators and market operators have complained about how these policies interact with the wholesale markets overseen by the Federal Energy Regulatory Commission (FERC). The capacity market in the PJM Interconnection — the grid operator responsible for wholesale power markets serving more than 65 million people across a large swath of the mid-Atlantic region and parts of the midwest — provides a recent demonstration. After lengthy delays, PJM recently held a capacity auction with a new rule in place that was designed to counteract the effect of state policies meant to promote clean energy. However, there is optimism that the first auction using this new rule will also be the last, as much-needed reform is on the horizon. Beyond that, much work remains in the world of electricity markets. In this week’s commentary, we’ll break all this down. 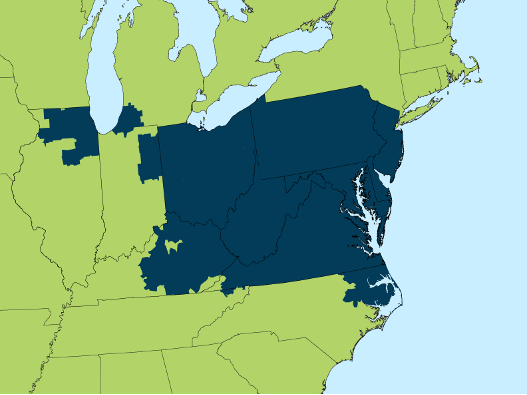 A map of the region served by PJM (source: https://www.pjm.com/about-pjm/who-we-are/territory-served)

Some grid operators, like PJM, use a capacity auction to procure resources they estimate will be needed to meet a future electricity need for that area of the country. In the auction, resources such as nuclear, gas, coal, or renewables, submit bids (with an amount and price) that are stacked up until the estimated future need is procured. At that point, the highest bid that clears the auction, called the clearing price, becomes the price for all the resources that bid at or under that clearing price.

Resources are assumed to submit bids that cover their costs. In this type of auction, the more resources that bid lower prices, the lower the clearing price is. When resources receive funding from additional sources, such as state programs to encourage clean energy development, their costs may be lower, allowing them to submit lower bids. These state programs are fully consistent with state authority under federal law, as state attorneys general have explained.

However, PJM identified a perceived threat to higher-cost fossil generators from the potential that clean energy resources could submit lower bids, leading to a lower clearing price, and thus blocking the higher cost generators from participating. FERC approved a rule change in 2019 that expanded PJM’s “minimum offer price rule” (or MOPR) to address those clean energy sources. A MOPR sets an offer floor, requiring bids from certain resources to be at or above the floor. The MOPR was originally developed to address the potential exercise of market power by entities that buy and sell electricity (think traditional monopolists that have an incentive to submit low bids because they will benefit as a buyer).

But the MOPR has morphed into a tool that can be used to undercut state-preferred clean energy, divorced from buyer-side market manipulation. PJM’s new version of the MOPR requires resources that receive certain state subsidies to bid into the capacity auction at an offer floor that was higher than they would otherwise have bid, which means they may be less likely to clear the auction. If state-supported cleaner resources do not clear the capacity auction, other generators will receive auction revenue instead — potentially keeping dirtier generation online. This can be a barrier to states reaching their clean energy targets (and threatens customers with higher bills to boot).

PJM recently held its capacity auction for the year beginning June 2022. There was plenty of good news. The auction price was the lowest it has been in 11 years (dropping from $140 per megawatt-day in the last auction to $50 per megawatt-day); saving consumers billions of dollars. More renewables cleared the market. Coal generators cleared less than the prior auction, signaling the increasing uncompetitiveness of coal. Although in this auction the expanded MOPR may not have had the harsh effects feared, the rule remains a problem — threatening future development of clean energy, consumers, and states.

Signs point to this version of the MOPR being on its way out. State attorneys general and many other stakeholders, advocates, and utilities have challenged the expanded MOPR. Now, PJM itself has proposed to roll back the expanded MOPR, and stakeholder discussions are underway to do so (with court challenges to the MOPR held in abeyance). And FERC Chairman Richard Glick has made clear that he thinks reform is needed.

Once the MOPR in PJM is reformed, what comes next? Capacity markets such as PJM’s are complicated and have frequently changing rules. In PJM, estimates of future demand and PJM’s calculation methods often result in an over procurement of gas generation, rather than a portfolio of cleaner resources. The capacity market — as well as other markets for energy and different services needed to support the grid — needs to be critically examined.

The time to address transmission is also now. Clean energy resources face significant expense and delay in trying to connect to the transmission system. Buildout of the grid to transport new resources such as offshore wind is needed.

FERC has been playing a strong role in the clean energy transition. The agency has begun examining many of these issues, with input from state attorneys general and other stakeholders from across a wide range of backgrounds. FERC recently held technical conferences on resource adequacy in the evolving electricity sector; electrification; New England market design; and extreme weather, climate change, and electric reliability. Transmission talks are also underway. And FERC is undertaking the creation of an Office of Public Participation and working to increase its attention to environmental justice.

If you are interested in learning more about how to effectively interact with FERC and engage in FERC proceedings, view the webinar the State Impact Center hosted in April on FERC practice here. And keep an eye on FERC’s website. As FERC opens new proceedings and works on new rules, there will continue to be many opportunities to engage on these issues essential to the future of the grid.

Jessica R. Bell is an experienced attorney dedicated to promoting the public interest in the environmental and energy sectors. She is Deputy Director of the State Energy & Environmental Impact Center.