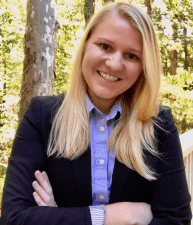 Cassi Carley is a 3L interested in privacy and cybersecurity, particularly regarding technology innovation, regulation, and policy and their intersection with human rights. Prior to law school, Cassi received a Ph.D. in Computer Science from Duke University, focusing on computer vision and AI. Her thesis was on human activity classification in surveillance settings. Additionally, Cassi explored the ethics of emerging technology as a fellow at the Duke Center on Law & Technology; founder of Ethical Tech; and member of Duke's Moral AI research group, leading a presentation at We Robot on the group’s work on algorithms and kidney exchange policies (whogetsthekidney.com). At NYU, Cassi has continued exploring technology and the law as a: Cyber Scholar and Latham & Watkins Technology award recipient, student fellow for the Privacy Research Group, research assistant for Professor Catherine Sharkey on the Administrative Conference of the U.S. and AI in federal agencies, and as co-founder and President of Rights over Tech, a new student group. Cassi is also a Birnbaum Women’s Leadership Network fellow and member of OutLaw. Cassi spent her 1L summer as a Privacy, Data, and Security fellow at Perkins Coie in Seattle, including a two-week externship with Intel in the Bay Area. During her 2L summer Cassi returned to Perkins and was also a summer associate at Covington, D.C.. Cassi is externing for the NY Attorney General economic justice clinic this Fall, working with the Bureau of Internet and Technology.