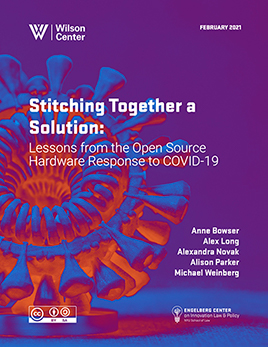 Stitching Together a Solution: Lessons from the Open Source Hardware Response to COVID-19

On February 7, 2020, with only 270 documented COVID-19 cases and 1 reported death outside of mainland China, WHO Director-General Dr. Tedros Adhanom Ghebreyesus issued a warning: “The world is facing a chronic shortage of personal protective equipment.” Although COVID-19 had not reached crisis level in the public consciousness, it was already clear to public health authorities that the virus was something the US government needed to prepare for, and that preparation needed to start immediately.

Despite the warnings, systems failed to meet the needs created by the exploding crisis. Business executives in the manufacturing industry sounded the alarm that they would not be able to ramp up production of equipment without government support and coordination. Stories of healthcare workers crafting gowns from garbage bags flooded mainstream news and social media as COVID-19 rapidly spread. Media attention, public outcry through viral hashtags like #GetUsPPE, and political leaders alike joined to call out the government’s response and the nation’s manufacturing shortcomings. It was clear that more equipment was needed and traditional supply chains were not up to the task.

Thousands of individuals—across the country, and around the world—met this moment of need with ingenuity. They formed virtual networks—small and informal at first, quickly becoming larger—to design, manufacture, and distribute medical supplies. These networks activated engineers, medical professionals, logistics experts, and regulatory specialists to design new equipment that could be created with the materials and equipment at hand. They tapped manufacturing capacity tucked into the corners of communities to produce it and found ways to distribute equipment to places with acute need. A new distributed, locally produced nation- and world-wide supply chain emerged from nothing in a matter of weeks.

With tens of thousands of makers engaged and hundreds of groups around the country coordinating their own manufacturing and distribution, grassroots communities demonstrated a tremendous response to PPE shortages domestically and globally. Designs coordinated by UH Ventures were adopted by the State of Ohio as standards of care. Make4Covid delivered 120,000 units of PPE in 6 months, many to rural and children’s hospitals and the Navajo Nation. Open Source Medical Supplies (OSMS) documented the creation of supplies with an estimated commercial value of $268 million. Volunteers at Helpful Engineering logged about 23 million hours of volunteer work, valued by Helpful Engineering at $130 million in labor costs.

Overall, the OSH response to the COVID-19 crisis is an inspiring example of disparate communities coming together to leverage open, distributed design and manufacturing to meet a moment of international need. At the same time, this collective ingenuity was necessary because of failures in both traditional supply chains and response coordination. While the open hardware response to COVID-19 was incredibly successful, it was significantly less effective than it could have been with more intentional coordination—including within OSH communities, and between open hardware communities and various government authorities working on different aspects of the response.

Next time, we can do better. Collectively, we have an opportunity to understand what happened in spite of the missteps, to identify ways to avoid similar problems in the future, and to create the infrastructure required to leverage the power of OSH. This report synthesizes lessons learned from a range of stakeholders connected to the OSH COVID-19 response from different perspectives, including federal authorities, medical officials, and on-the-ground solutions providers working from distributed, grassroots, OSH communities.

The focus of our analysis is how these communities formed, grew, structured themselves, and operated, as well as what factors contributed to—or inhibited—their success. We are particularly interested in coordination among communities, between communities, and between the open, grassroots, and more formal responses to the crisis. This report also identifies key challenges and friction points that emerged in the developments of these communities.

This report is divided into three specific sections, each exploring a key set of themes:

Communities and Coordination—How did these communities form, organize themselves, communicate (within themselves, between themselves, and with public health authorities), and deliver supplies to those in need?

Building Scale and Capacity—How did these communities organize to achieve their desired impact and move from informal networks toward more formal structures?

Standards and Regulations—How did these communities interact with existing legal and regulatory frameworks that govern the manufacture and distribution of medical supplies?

After exploring each of these themes, this report examines the implications of this approach to crisis response and offers recommendations for the future—including those directly relevant to pandemic response and other types of crisis or disaster response, and broader recommendations designed to identify opportunities for elevating the value of grassroots and OSH approaches in a range of top-down research and policy processes. The grassroots OSH response to COVID-19 provides a vivid illustration of how resilient a distributed response to a crisis can be, in spite of challenges, including a lack of structural support from authorities. By recognizing the value of this community, we can take the first steps to make it even more effective in the future.