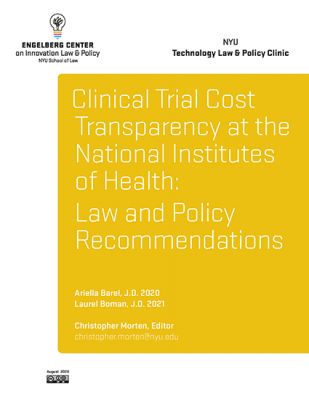 This report discusses the need for cost transparency into pharmaceutical research and development and, specifically, transparency into the costs of clinical trials funded by the United States National Institutes of Health (NIH), and proposes a set of legislative, administrative, and other reforms to achieve that goal.

Section II—Introduction—provides an overview of current barriers to global access to medicines and how cost transparency into pharmaceutical research and development (R&D) at the NIH and among other drug developers—philanthropic, academic, and industry—can address some of those barriers. Current obstacles to global access to medicines include increasingly high prices charged by pharmaceutical companies and diminishing financial incentives for these companies to develop drugs for diseases that primarily affect small or poor populations. Transparency into four key components of the pharmaceutical market—drug prices, R&D and manufacturing costs, pre-clinical and clinical trial data, and the landscape of patents and other intellectual property—is increasingly being emphasized by advocates as a necessary ingredient in the effort to expand and protect access to affordable, accessible, effective, and safe medicines.

Section III—The Case for Clinical Trial Cost Transparency at the NIH—explains why the policies proposed in this paper target disclosure of disaggregated clinical trial costs at the NIH. Cost transparency into R&D and, particularly, clinical trials, is essential for policymakers to address drug pricing for two reasons: (1) to evaluate the pharmaceutical industry’s claims that the high costs of R&D justify the extraordinarily high prices of medicines, and (2) to design policy mechanisms that can incentivize innovation without the monopoly pricing associated with the patent system. This paper focuses on clinical trials in particular because they are often the most expensive aspect of pharmaceutical R&D. Many arguments have been raised against cost transparency into R&D by various stakeholders; though they are worth careful consideration, none of these arguments outweigh the arguments in favor of transparency. This paper focuses on the NIH because it is the largest public funder of biomedical research in the world. As a governmental agency, it spends billions of taxpayer dollars each year, which in itself would justify close oversight by Congress and the public. Transparency into NIH’s costs of running clinical trials would provide an important comparison to the cost estimates released by industry-funded studies.

Section IV—The Ideal: What Data is Needed?—presents the list of disaggregated clinical trial cost data points that should be disclosed by the NIH. Existing studies of pharmaceutical R&D costs use undisclosed, self-reported data from pharmaceutical companies, proprietary databases, or certain publicly available data. None of these are sufficient to present a full picture of clinical trial costs. We discuss an array of potential data points and ultimately propose the following list, based on three considerations: (1) primary drivers of clinical trial costs, (2) administrative ease of collecting and disclosing data, and (3) importance of data points in understanding overall cost.

Costs we recommend should be reported for each study overall, per patient, and per year:

Section V—Existing Disclosure by the NIH Is Insufficient—describes existing ways the NIH shares a limited amount of information with the public and explains the legal sources for that information sharing. Clinical trial sponsors must register applicable trials on ClinicalTrials.gov and submit certain results to the NIH for publication upon trial completion. The NIH is required by statute to administer ClinicalTrials.gov and enforce compliance with the required submissions. Secondly, the NIH maintains RePORTER, a database containing information about NIH research grants, as required by statute. RePORTER records generally include lump-sum grant awards but not disaggregated costs. The NIH also publishes some aggregated data about its research grant awards in the Data Book and certain information about intramural research studies in the intramural database. Lastly, the NIH is required by statute to submit triennial reports to Congress containing certain information, and some institutes and centers within the NIH apparently publish regular reports voluntarily. None of these existing tools accomplishes the clinical trial cost disclosure advocated for in Section IV.

Section VI—Options for Reform and Top Recommendations—recommends requiring disclosure on ClinicalTrials.gov of the clinical trial cost data outlined in Section IV. ClinicalTrials.gov is the natural home for specific clinical trial cost data because the website is already structured to collect and display detailed information about each registered trial, and only small changes would be necessary to include cost data. We propose achieving this reform by amending 42 U.S.C. § 282(j), which currently governs ClinicalTrials.gov, in two ways: (1) require that the NIH post the cost data that it possesses for any clinical trial funded in whole or in part by the NIH, and (2) require that all sponsors of clinical trials that receive NIH funding submit the proposed cost data to the NIH to be posted on ClinicalTrials.gov upon study completion. As a next-best or complementary reform, we recommend two improvements to RePORTER: (1) a clearer connection between clinical trials and RePORTER records, and (2) further disaggregating cost information in existing RePORTER records. Congress should amend 42 U.S.C. § 282b, the statute that governs RePORTER, to require these improvements. Lastly, we propose improvements to the Data Book, intramural database, and NIH reports that would help create a clearer picture of clinical trial costs than currently exists, but these improvements are not our main focus, as they would not achieve the reporting goals we lay out in Section IV.

Section VII—Arguments Against R&D Cost Transparency—addresses two arguments against reform and concludes that neither should stand in the way of the NIH disclosing this data. The first argument we address is that the administrative burden associated with additional reporting is too high. We believe that cost disclosure will not be especially burdensome because the NIH already requires its grantees to report disaggregated costs, which means grantees already track and the NIH already possesses disaggregated cost data on extramural research. Though we know less about how the NIH tracks its intramural research costs, it is reasonable to expect it to at least do so on the same level it requires of grantees. Finally, the societal benefits of sharing cost information far outweigh potential added costs of reporting. The second argument we address is that cost information on NIH-funded clinical trials is a trade secret or confidential commercial information. Cost data on intramural research conducted exclusively by the NIH, a government agency, cannot be considered a trade secret or confidential commercial information. For extramural grants, HHS and NIH rules, court decisions, and FOIA precedent all agree that clinical trial cost information does not qualify as a trade secret or confidential commercial information and can be disclosed. This suggests that the agency is well within its legal authority to disclose detailed clinical trial cost information. We also address a related argument, primarily raised by industry, that even if it is not legally protected information, disclosure of costs will harm the competitive position of drug developers. We doubt this is the case, because much of this information is already available through publicly disclosed SEC filings. As applied to the NIH, we recognize that grantees compete for grants and awards but believe it is fair to require such reporting for researchers who receive public funding.