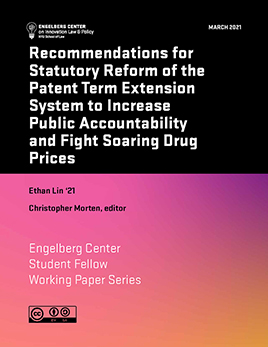 Patent Reform for Social Justice: How Representing an HIV/AIDS Activist Group Sparked a Proposal To Reform an Important Part of the Patent Act

In 2019, I was part of a team at NYU’s Technology Law and Policy Clinic representing the HIV/AIDS advocacy group PrEP4All. PrEP4All discovered evidence that Gilead was intentionally manipulating the patent term of one of the patents covering its anti-HIV compound through a delay tactic during drug development. The company withheld evidence of its actions from the Patent and Trademark Office in its application for a patent term extension. On behalf of PrEP4All, my Technology Law and Policy Clinic team submitted a petition to alert the Patent and Trademark Office of the drug company’s actions, but the Office denied the petition without considering its merits based on a rule the Office had promulgated to bar third-party petitions on patent term extensions. This highly undemocratic rule is not required or even encouraged by the statutory provision for patent term extension, but it is enabled by vague statutory language.

My experience with PrEP4All at the Patent and Trademark Office inspired a new Engelberg Center Student Fellow Working Paper: Recommendations for Statutory Reform of the Patent Term Extension System to Increase Public Accountability and Fight Soaring Drug Prices. The paper details legislative recommendations to reform the patent term extension system. These recommendations, can be a part of a broader toolset for access-to-medicines and drug pricing advocates and activists to push back against skyrocketing drug prices caused by excessive pharmaceutical patenting.

In the grand scheme of things, this paper is situated within an access-to-medicines movement that I believe is ultimately a fight for survival and justice. High drug prices disproportionately harm people who are low-income, and low-income people are often marginalized in multiple ways.

For example, even though we have the means to end the HIV epidemic today, the HIV epidemic is still present and growing, with more than 1.1 million Americans living with HIV and many more at risk. PrEP, a drug that reduces the risk of getting HIV from sex by 99%, is inaccessible to many who need it due to its high cost. PrEP’s high price is part of a broader trend: the costs of HIV treatment drugs have jumped four times the inflation rate since 2012.

Expensive, inaccessible HIV drugs are a national problem, but that problem doesn’t afflict everyone equally. Communities that are disproportionately impacted by HIV bear the heaviest burden. These include transgender women and gay, bisexual and other men who have sex with men, especially those who are Black or Latinx. These communities are also more likely to experience poverty than the general population and less likely to have health insurance.

This confluence of factors is not coincidental but a consequence of marginalization, which is why the fight for access to medicine is both a fight for survival and a matter of social and economic justice. While the barrier to universal access to medicines is a multi-headed hydra and there is no single solution to achieve justice, one essential step is to reform our current patent system, which places profits over people. I consider this paper a contribution to the wider struggle.