This is a story about how the most sophisticated copyright filter in the world prevented us from explaining copyright law. It doesn’t involve TikTok dance moves or nuanced 90s remixes featuring AOC. No, it involves a debate at a law school conference over how and when one song can infringe the copyright of another and how exactly one proves in a courtroom if the accused song is “substantially similar” enough to be deemed illegal. In the end, because it was blocked by one of the music companies who owns the song, it also became a textbook study in how fair use still suffers online and what it takes to pushback when a video is flagged. A copyright riddle wrapped up in an algorithmic enigma, symbolic of the many current content moderation dilemmas faced by online platforms today.

If you want to watch the video it is available here. If you prefer to listen to it you can subscribe to the Engelberg Center Live Events podcast here.  And if you are curious about how new European laws about copyright filtering may impact this sort of situation in the future both inside and outside of Europe, you might be interested in our upcoming conference examining online copyright liability A New Global Copyright Order? on April 20, 2020. You can find out more information about that conference here.

The video in question was a recording of the “Proving Similarity” panel, which was part of the Engelberg Center’s Proving IP symposium in May of 2019.  The panel, which was moderated by Professor Joseph Fishman, featured presentations and discussions by Judith Finell and Sandy Wilbur.  Ms. Finell and Ms. Wilbur were the musicologist experts for the opposing parties in the high profile Blurred Lines copyright infringement case. In that case the estate of Marvin Gaye accused Robin Thicke and Pharrell Williams of infringing on Gaye’s song “Got to Give it Up” when they wrote the hit song “Blurred Lines.”

The primary purpose of the panel was to have these two musical experts explain to the largely legal audience how they analyze and explain songs in copyright litigation.  The panel opened with each expert giving a presentation about how they approach song analysis.  These presentations included short clips of songs, both in their popular recorded version and versions stripped down to focus on specific musical elements.

In June of 2019, a video of the panel was posted to the NYU School of Law youtube page.  In August of 2019 a new version of the video was posted.  The audio track of the new video was identical to the first. However, more legible versions of the presentation slides were inserted in order to make it easier for viewers to read them.

Unlike the first video, this second video was flagged by YouTube’s Content ID system for multiple claims of infringement: 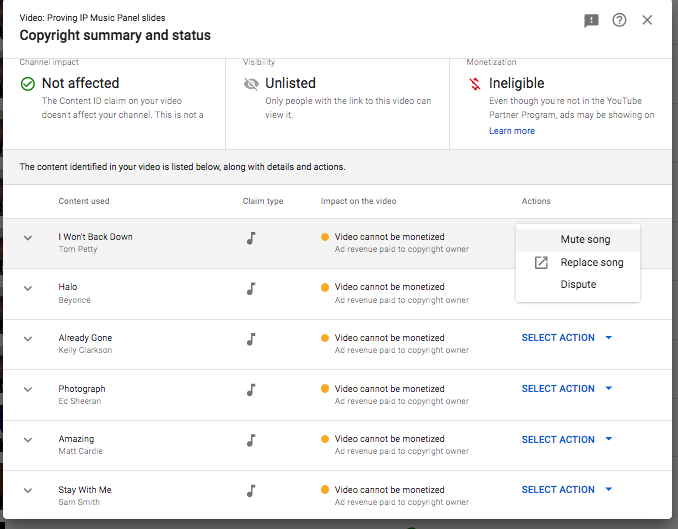 The video used clips of the songs in question to illustrate specific points about how they were analyzed in the context of copyright infringement litigation.  As such, we were confident that our use of the songs were covered by fair use and disputed the claims using YouTube’s internal system.

Shortly thereafter we received notice that the rightsholder was rejecting our dispute on multiple songs. 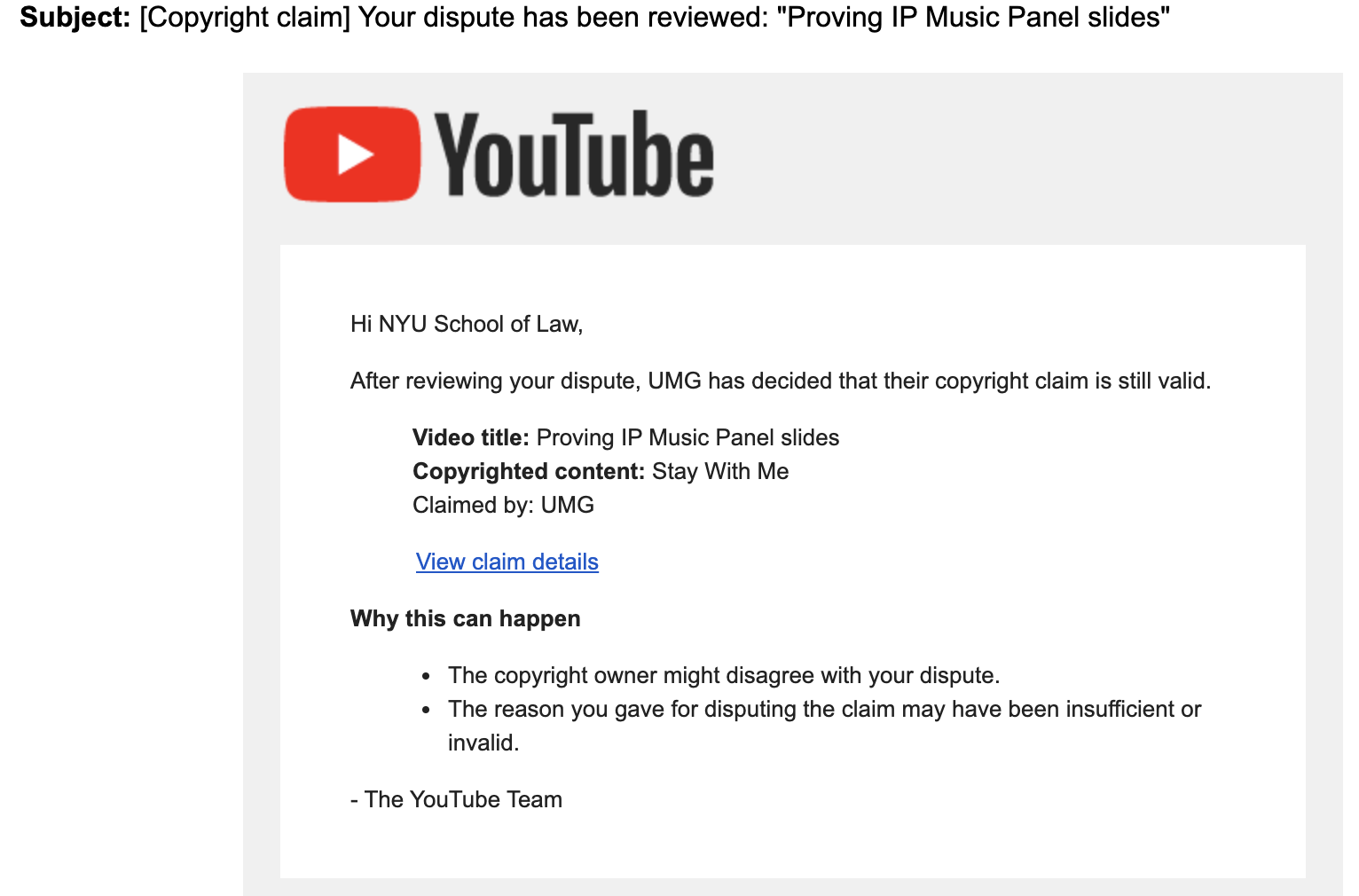 The Decision and the Question

Still confident that our uses were covered by fair use, we researched the YouTube counternotification process.  We discovered that if we continued to challenge the accusation of infringement and lost, our video would be subject to copyright strikes.  If the account was subject to multiple strikes its ability to live stream could be restricted or the account could be terminated.  While our colleagues in the communications department were highly supportive of our efforts, they were concerned that one misstep could wipe NYU Law’s entire YouTube presence off the internet.

In deciding how we could continue to press our case, one question was unclear.  Our single video was subject to multiple copyright infringement claims.  If we failed to prevail, would that mean that the account was subject to one copyright strike because all of the claims were against a single video, or multiple strikes tied to each claim against the single video?  As there were four remaining claims against our video, and three claims could result in the termination of the account, the distinction was highly relevant to us. 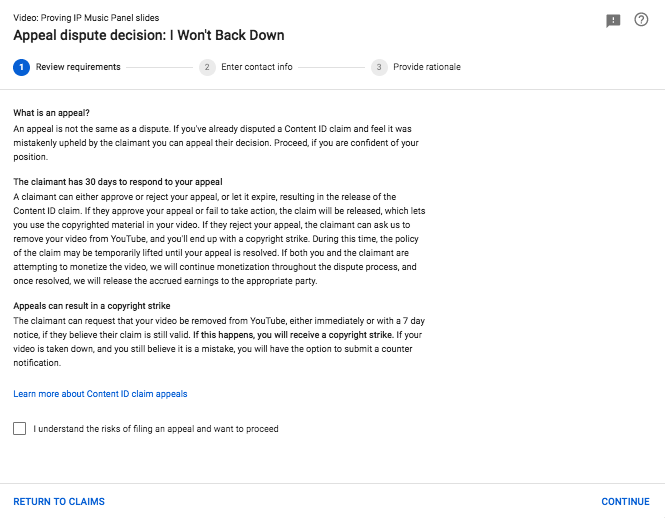 Unfortunately, we still do not know the answer to that question.  This page seems like the closest to one having an answer, but it does not provide one to our specific question.  We tried using the ‘Was this helpful?’ link at the bottom to get additional information, but YouTube did not respond.

This would have been a dead end for most users.  Unable to understand how the already opaque dispute resolution process might impact the status of their account, they would have to decide if it was worth gambling their entire YouTube account on the chances that their some combination of YouTube and the rightsholder would recognize their fair use claim.

Since we are the center at NYU Law focused on technology and innovation, it was not a dead end for us.  We reached out to YouTube through private channels to try to get clarity around the copyright strike rules.  While we never got that clarity, some weeks later we were informed that the claims against our video had been removed.

What lessons can be learned from this process?

First, it highlights how challenging it can be for users with strong counter-arguments to dispute an allegation of infringement by large rightsholders.  The Engelberg Center is home to some of the top technology and intellectual property scholars in the world, as well as people who have actually operated the notice and takedown processes for large online platforms.  We had legal confidence in our position that would cost an average user tens of thousands of dollars (if not more) to obtain.  Even all of those advantages were not enough to allow us to effectively resolve this dispute.  Instead, we had to also rely on our personal networks to trigger a process - one that is still unclear - that resulted in the accusations being removed.  This is not a reasonable expectation to place on average users.

Second, it highlights the imperfect nature of automated content screening and the importance of process when automation goes wrong.  A system that assumes any match to an existing work is infringement needs a robust process to deal with the situations where that is not the case.  Our original counterclaim included a clear explanation of the nature of the video and the reasons for using the clips.  It is hard to imagine someone with any familiarity with copyright law watching the video, reviewing our claim, and then summarily rejecting it.  Nonetheless, that is what happened.  No matter how much automation allows you to scale, the system will still require informed and fair human review at some point.

Nonetheless, we are happy that the video has been restored.  You can watch it - along with all of the other videos from Proving IP - on the NYU Law YouTube channel. You can also listen to the audio from it and all of the Engelberg Center’s events by subscribing to our live events podcast.

Finally, Europe has recently passed legislation designed to oblige more websites to implement automated copyright filters.  Our event A New Global Copyright Order? on April 20 will examine how that legislation will impact Europe and the worldwide conversation around copyright law.  We hope to see you there.