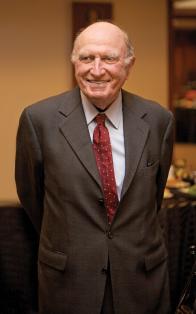 We mark with great sadness the passing of Norman Dorsen, who died at home on July 1, 2017, shortly after his retirement from the Law School and after a brief illness following complications from stroke.

The Law School held a Memorial Service on Monday, September 18, 2017 in Tishman Auditorium at NYU School of Law (Vanderbilt Hall, 40 Washington Square South). A live feed was available to overflow audience, and a reception for guests followed. Sylvia and Helen invited former Fellows and guests to convene after the Memorial Service in the Faculty Library in Vanderbilt Hall. An open microphone was provided so that stories about Norman others might not have know could be shared. You may listen to those comments here.

Norman’s contributions to civil liberties were unparalleled—in his mentorship of young lawyers, his creation of enduring progressive organizations, his leadership at both NYU Law School and the ACLU, and his arguments in leading constitutional cases. Two-thousand-seventeen marked the fiftieth anniversary of several of Norman’s landmark Supreme Court cases. In re Gault, in 1967, first recognized due process rights for juveniles accused of delinquency. See v. Seattle, also in 1967, protected commercial property from intrusions by administrative officials. While winning these landmark victories, Norman also was lead counsel on lower court cases that would become seminal Supreme Court decisions. Levy v. Louisiana, in 1968, recognized rights of children born to unmarried parents; and, Flast v. Cohen, that same year, liberalized standing requirements for Establishment Clause violations. Many scholars, historians, film-makers and activists documented these important decisions, and Norman worked closely with them.

Throughout 2017, Norman remained engaged with the Hays Program. In the spring, we held our traditional seminar dinners at Norman’s apartment. In May, we celebrated Norman’s retirement from the Law School with a book of tributes from the Hays community. You can read those tributes here, as well as letters written on the occasion of Norman’s eightieth birthday here. We also include the Law School’s announcement to the NYU community here, and the New York Times obituary here.